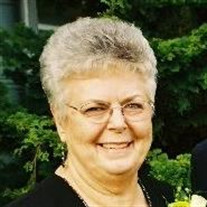 Jane Hemnes, age 78 of Bellingham, passed away in Bellingham on January 4, 2015. She was born January 16, 1936 in Laurel, WA to Arthur and Dorothy Anderson. She attended Meridian Schools and maintained lifelong friendships with her classmates. Jane married Al Hemnes on May 4, 1955 at the Laurel Community Baptist Church. Jane worked at the Lynden Department Store, True Value and Pynors as a sales clerk. She lived in Laurel for most of her life until she and Al moved to Bellingham 9 years ago. She enjoyed and was meticulous with her sewing, knitting and crocheting and shared her gift of handwork with everyone she loved. She sewed her children’s clothes when they were young and knit and crocheted hats, booties, sweaters and afghans for all her grandchildren and great-grandchildren and many other friends and family. Many a brand new baby has kept warm and cozy thanks to her signature hats. Jane and Al were avid campers. They started out in a tent and camped all throughout their children’s growing up years. They enjoyed fishing and camping with friends and family and camping is a tradition that they passed on to each of their children and grandchildren. Jane kept up on traditions like making lefse with her family and candy and fruitcakes at Christmastime. She and Al followed their children’s and grandchildren’s activities year after year. Jane took great joy in keeping up with family and friends. She was very involved in Young Homemaker’s Club, Laurel Orthopedic Guild, and Laurendeau Foundation. She was preceded in death by her great-grandson Maddox. She is survived by her loving husband of 59 years, Aldin, children Janet (Dale) Nilsen, Jeff (Lynette) Hemnes and Barbara Hemnes, grandchildren Breanna Nilsen (Eric Markwood), Karsten Nilsen, Lucas (Amy) Hemnes, Tessa (Brian) Kooiker and Megan (Brian) VandenHeuvel, great-grandchildren Sydni, Moses, Kolt, Millie, Sanders, Skarlett and Winslet, sister Donna (Ron) Weidkamp, numerous nieces and nephews and many loving family members. Memorials may be made to Meridian Public School Foundation, 214 N. Commercial St., Bellingham, WA 98225. An open house reception will be held at the Squalicum Boathouse at Zuanich Point, 2600 N. Harbor Loop Dr. in Bellingham from 12 Noon to 3 PM on Friday, January 9th. You may share memories with the family at www.westfordfuneralhome.com.

Jane Hemnes, age 78 of Bellingham, passed away in Bellingham on January 4, 2015. She was born January 16, 1936 in Laurel, WA to Arthur and Dorothy Anderson. She attended Meridian Schools and maintained lifelong friendships with her classmates.... View Obituary & Service Information

The family of Jane Hemnes created this Life Tributes page to make it easy to share your memories.

Jane Hemnes, age 78 of Bellingham, passed away in Bellingham...