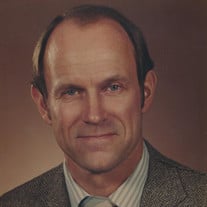 Jim Wilson, age 81, passed away peacefully in Bellingham on Friday, March 1, 2019. He was born on October 20, 1937, in Superior, WI to George and Ellen Wilson. Jim married Barbara Sanford in 1957, and together they raised their daughter, Kimberly. In 1978, Jim married Cynthia (Cindy) Madison and together they raised their two children, Jennifer and Scott. Jim lived in Seattle until 1966, working for the Highway Department and attending the University of Washington. At the Highway Department he worked on the design of the new Interstate 5 through Seattle. He graduated with a degree in Civil Engineering from the University of Washington in 1965 (Go Dawgs!). Jim founded Wilson Engineering in 1967, and owned and operated the business until he retired in 2001. He was active in the Rotary Club of Bellingham. Jim served as a Trustee of Whatcom Community College for 10 years and was a board member of the Bellingham/Whatcom Housing Authority for 15 years. Jim’s hobbies included flying, racing motorcycles, and restoring old cars. Jim restored many classic cars including a ’39 Plymouth convertible and a ’36 Ford Phaeton, both Best in Show winners. He also restored a 1955 Square Four Ariel motorcycle. Jim enjoyed flying his V-Tail Bonanza for both work and pleasure, and attending air shows. Jim enjoyed snow skiing, water skiing, boating, hiking and camping. Jim is survived by his loving wife, Cindy, three children, Kim Wilson (Charlie Byler), Jenny (Jared) Fields and Scott (Mallory) Wilson, and ten grandchildren: Ellen, Aina, Tyler, Carson, Parker, Grayson, Emma, Wren, Hazel and one on the way. He is also survived by this brother, Jean Wilson, sister Sue Brentson, and many loving relatives and friends. A celebration of Jim’s life will be held at 3 PM on Thursday, March 7th at the Bellingham Golf and Country Club. Memorials in Jim’s name may be made to the Whatcom Community College Foundation, 237 W. Kellogg Rd., Bellingham, WA 98226 or to the Rotary Club of Bellingham Foundation, 2200 Vining St., Bellingham, WA 98229, or to the Michael J. Fox Foundation, Donation Processing, P. O. Box 5014, Hagerstown, MD 21714. You may share memories with the family at www.westfordfuneralhome.com

Jim Wilson, age 81, passed away peacefully in Bellingham on Friday, March 1, 2019. He was born on October 20, 1937, in Superior, WI to George and Ellen Wilson. Jim married Barbara Sanford in 1957, and together they raised their daughter, Kimberly.... View Obituary & Service Information

The family of James E. Wilson created this Life Tributes page to make it easy to share your memories.

Jim Wilson, age 81, passed away peacefully in Bellingham on Friday,...