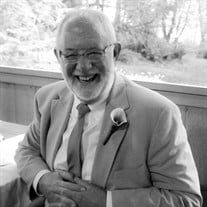 Casey Thompson passed away in Bellingham on April 22, 2020 due to complications arising from emergency surgery. He was born July 3, 1940 in Bellingham to James J. & Georgiana “Jean” Thompson and graduated from Bellingham High School in 1958. He was a member of the Sigma Nu Fraternity where he made a group of lifelong friends and starred as a varsity baseball pitcher. He earned his BA at the University of Washington, and his Law degree from the University of Montana. While studying at UW he majored in Transportation, spurring his curiosity and love for travel. He and Barb literally travelled the world with their closest friends. Casey practiced law in Bellingham for many years, retiring as partner in 2009 with Ludwigson, Thompson, Hayes & Bell. Casey had two brief stints in public service: serving as Prosecuting Attorney for Whatcom County and as a council member of the Bellingham City Council. He had two daughters, Tori & Meggin, with his first wife MaryAnne. He later married Christine and together they raised her son Michael. After Christine’s passing, Casey married Barbara with whom he enjoyed the rest of his life. Casey was known as a kind man: intelligent, gentle, and loving, he freely shared his wit, always offering “guidance” to his kids. Casey had a fondness for baseball that lasted a lifetime. He started playing at age 8 and ended his playing time as a member of the Bellingham Bell's pitching rotation in 1962. He later entered into ownership of the Bellingham Mariners, the single A farm team to the Seattle Mariners. His love for the sport transcended generations to his children and grandchildren, where he would take the time to play catch, throw batting practice and give guidance from his years of experience. The Big Guy leaves a lasting impression on all of us, who will dearly miss and remember him fondly. He was preceded in death by Tori and Meggin’s mother MaryAnne Goodman, his wife Christine, his father-in-law Robert Reid, and his sister Mary Lynn Thompson. Casey is survived by Barb, his adoring wife of 22 years, and children Tori Rock, Meggin (Bret) Podnar, Michael (Ameleah) Sullivan and Evan (Heather) Greenlaw. He is an immensely loved “Pa” to his grandchildren Alexa, Connor (Bailee), Blake, Madison, Stella and Clara. He is also survived by his brother Stuart; Christine & Barb’s mother Grace Reid and their siblings Georgene Reid, Susan (Jim) Fay, Karen Reid-Allen (Craig) and Melanie (John) Neate; Mary Lynn’s daughters Sarah & Erin; and many loving nieces, nephews, relatives and friends. In lieu of flowers, please consider a donation to the James P “Casey” Thompson baseball scholarship, shortly to be established at the University of Washington. A private family gathering will be held. You may share your memories of Casey with the family at www.westfordfuneralhome.com.

Casey Thompson passed away in Bellingham on April 22, 2020 due to complications arising from emergency surgery. He was born July 3, 1940 in Bellingham to James J. & Georgiana &#8220;Jean&#8221; Thompson and graduated from Bellingham High School... View Obituary & Service Information

The family of James P. "Casey" Thompson created this Life Tributes page to make it easy to share your memories.