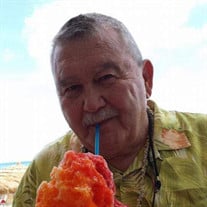 Butch was born October 7, 1946 in Richlands, VA to Virgil & Gladys (Edwards) Hinchey. Butch and his mother flew to Washington State when he was 6 months old to reunite with his father who had been stationed in Japan. They moved around a bit, and eventually settled in Sunnyside, WA where he graduated from High School in 1964. In November 1964 he joined the US Air Force and was stationed in San Antonio, Denver, Tucson, and Miami, as well as in Ubon, Thailand and Kwangju, Korea. In 1968 when he left the Air Force, he joined his parents in Blaine, WA. Not long after that he joined the Blaine Police Force, and 6 years later became Chief of Police. He retired after 28 years on the job. After retirement he attended Bellingham Technical College studying computer networking and was then hired in the BTC computer department from which he retired in 2002. Butch met his first wife, Linda Powell, at a wedding in June 1969 where he caught the garter and she the bouquet. He told Linda’s dad that night he was going to marry her, which he did on September 27, 1969. Together they had 3 children, Nicki, Jeremy & Kellie. He was a loving and involved dad who did everything possible to attend every sporting event, concert, play, etc. He and Linda were happily married for 31 years until her death in January 2001. Butch was fortunate to later meet Pat Thorpe, whom he married on June 5, 2004. Together they travelled the world on incredible trips that included an African Safari, seeing the Sistine Chapel in Rome, Mexico, France, Russia and several trips to the Caribbean. His last trip was to New York City to watch his dog Tyler in the Westminster Dog Show. They also enjoyed spending time in their 2nd home in Fountain Hills, AZ. Butch was an active member of Grace Lutheran Church in Blaine for many years, including singing bass in the choir, and later attended Christ Lutheran Church in Ferndale. He was elected to the Whatcom County Fire Commission in 2003 and served until 2009. Butch is survived by his wife Pat Hinchey, Daughter Nicki (Brion) Cortez, son Jeremy (Kara) Hinchey and daughter Kellie (Jay) Burroughs. grandchildren Carson Cortez, Madison, Brady & Jace Hinchey, Jamie (Cieara), Kole & Cody Burroughs. great-granddaughter Presley Burroughs, numerous nieces, nephews, cousins and friends, and his beloved dog Tyler. We will all miss him dearly. A small private service will be held to lay Butch to rest, and a Celebration of Life will be held later when conditions allow. Memorials may be made to: Christ Lutheran Church P.O. Box 845 Ferndale, WA 98248 clcferndale.org or Whatcom Humane Society 2172 Division St. Bellingham, WA 98226 whatcomhumane.org/donate

Butch was born October 7, 1946 in Richlands, VA to Virgil & Gladys (Edwards) Hinchey. Butch and his mother flew to Washington State when he was 6 months old to reunite with his father who had been stationed in Japan. They moved around a bit,... View Obituary & Service Information

The family of James V. Hinchey created this Life Tributes page to make it easy to share your memories.