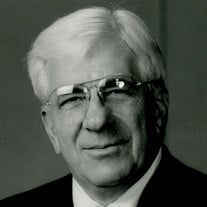 James C. Craven, 89, of Bellingham, Washington, died early Monday morning, January 12, 2015, in Seattle, Washington, following complications from surgery. Jim was born August 7, 1925, in Greenfield, Tennessee, the son of Arlie and Addie Craven. The family moved to Chicago in the 1930’s, and Jim graduated from Lakeview High School. He graduated from the University of Illinois, and the University of Illinois Law School, after serving in the Army during and after WWII. Jim married Gloria Pheney in November 1951, and they started a family in Springfield, Illinois. Jim and Gloria moved to Ashland, Oregon in 1999, and then to Bellingham, Washington in 2010. He is survived by his wife Gloria at home in Bellingham, along with their four children, William (Terri Tork) of Sacramento CA; Nancy (Jim Claypool) of Portland OR; Don (Denise) of Springfield IL; and Rebecca (Scott Linneman) of Bellingham WA, as well as grandchildren Joseph and David Craven, Anna and Meg Claypool and Charles and Dorothy Linneman. Jim practiced law in Springfield until 1964, when he was elected to the Fourth District Appellate Court, where he served until 1981. In 1981, he resigned from the Court, and resumed his law practice in Springfield with the freedom to take on the issues and cases he found compelling. Jim began offering legal help to students in the Public Affairs Reporting Program at the University of Illinois at Springfield, and to reporters and editors through the Illinois Press Association and Illinois Broadcasters’ Association. Those programs continue to this day. Jim also involved himself in many other cases and legislative matters involving First Amendment issues. In the early 1990’s the Press Association honored Jim with the creation and presentation of the James C. Craven First Amendment award. Jim was very active in the Democratic Party in Illinois and enjoyed the political process in all its forms. In 1984, Jim was an unsuccessful candidate for a vacancy on the Illinois Supreme Court. Perhaps the highlight of his legal work began in 1985, with the first of many cases filed under the federal Voting Rights Act on behalf of African American and Hispanic communities in Illinois and California. Those lawsuits resulted in changes in the form of municipal and special district governments in Springfield, Danville, Peoria and Chicago Heights, which guarantee minority voters the opportunity to elect representatives of their choice. Jim’s greatest joys in life were his partnership with Gloria (‘Myrt’), his pride in his children and the love of his grandchildren. He was a mentor to many and truly loved by his family. He is missed. In lieu of flowers, the family suggests memorial gifts to the Illinois Innocence Project at the University of Illinois, Springfield, Illinois. A private memorial service is planned

The family of James C. Craven created this Life Tributes page to make it easy to share your memories.