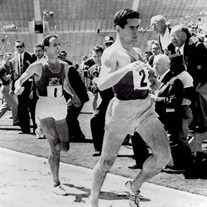 James Bailey, age 90, passed away peacefully at Whatcom Hospice House on March 31, 2020. James was an amateur middle-distance runner from Australia. James shared many fond memories with his second family, his track and field teammates from the University of Oregon, one of the elite track and field schools in the nation. During his tenure at the University, his accomplishments, along with his teammates, put the University on the map as being one of the predominant Universities in track and field in the nation during the initial “Bowerman Years.” This tight-knit group, which includes runners from the '50s and '60s, had a very high regard and love for James and have been in close contact with him through his entire adult life. They were a big part of his life. He was a true inspiration to them for his exceptional achievements and fellowship on the track. He relished the culture of the rural Oregon area west of Eugene, which he visited with a resident teammate during their annual reunions in recent years. He achieved world-wide recognition in the track and field world when, in 1956, he defeated the world record holder, running the first sub four minute mile on American soil with a time of 3.58.6, the second best time in the world at that time and a new collegiate record. His other accomplishments include a NCAA championship in the mile, two consecutive Australian 880 championships among others. Bailey was ranked #3 miler in the world in 1956. You can see James Bailey- the Forgotten Four-Minute Miler at https://www.youtube.com/watch?v=RYSKRnQCDlU. After retiring from competitions he played professional rugby in Australia. He then returned to the United States and lived in the Pacific Northwest for the rest of his life, working as a sportswear promoter in Kirkland, WA, and then a real estate agent in Bellingham, WA. James is survived by seven children from his first wife and one sister. James was an active member of Church of the Assumption in Bellingham, where he recently donated $100,000 to the Assumption Catholic School Foundation. A Mass of Christian Burial will be held at Church of the Assumption at a later date. Memorials in James’ name may be made to the Assumption Catholic School Foundation, 2116 Cornwall Ave., Bellingham, WA 98225. You may share memories of Jim at www.westfordfuneralhome.com.

James Bailey, age 90, passed away peacefully at Whatcom Hospice House on March 31, 2020. James was an amateur middle-distance runner from Australia. James shared many fond memories with his second family, his track and field teammates from the... View Obituary & Service Information

The family of James Bailey created this Life Tributes page to make it easy to share your memories.