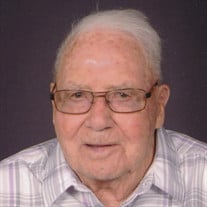 Jack Aubrey Libolt passed away peacefully at the age of 92 on May 12th, 2020. He will always be remembered for his loving smile, his warm little chuckle, and his unconditional love. When the family reflects over Dad’s life, words that come to mind are kind, humble, content, patient, quiet, loving, dependable, soft-spoken, and honest. Jack was born on the family homestead in Eagle Butte, SD, on August 24th, 1927, the youngest of 10 children. He attended one-room country schools until he graduated from Eagle Butte High School in 1945 as one of eleven in his graduating class. He worked on the family ranch until joining the Army during the Korean War. He served outside of Seoul, Korea from 1950-52 and was honorably discharged. He returned home and soon married his wife, Gladys Schwahn in 1955. He helped his brother on the family ranch for a short while but soon moved to work as a hired ranch hand in Ridgeview, SD. They had two children before moving to Cody, WY, and soon added two more to the family. He worked as a glazier and in a gypsum sheetrock plant for a few years before moving to Lynden, WA, to be closer to his brother Willis Libolt and sisters, Lydia VanderPol and Mary Smith. He worked in the construction trade for a short time and then worked on the custodial staff for the Lynden School District for over 20 years at Lynden High School and Fisher Elementary School until his retirement. Jack loved to garden and we all shared in the bounty of his gift. He learned to garden from his mother, and he passed his passion down to his family. He was a handyman and taught us how to build and fix things and what it meant to be a dependable worker. He rarely missed a day of work and took pride in a job well done. He loved sports, especially baseball. He enjoyed watching the Seattle Mariners and his grandkids play all through Lynden Youth Sports through high school. Jack was preceded in death by his parents Chester Clyde and Della Maude Libolt of Eagle Butte, SD, siblings Bert (Laura) Libolt, Lorraine (Garrett) Likkel, Pearl (Lee) Konkler, Lydia (Harry) VanderPol, Eldon “Mike” Libolt, Leola (Wilbur “Gene”) Wright, Willis (Johanna) Libolt, Aleta (Ted) Minor, and Mary (Harold) Smith. Jack is survived by his loving wife of sixty-four years, Gladys Schwahn Libolt, son, Les (Colette) Libolt of Seattle, daughter Peggy (Duke) Dykstra of Lynden, son Clyde (Gladys) Libolt of Lynden, and son Joe (Leora) Libolt of Birch Bay, grandchildren, Amy Libolt of Seattle, Patrick Libolt of Seattle, Jackie (Jake) Abercrombie of Lynden, Brian (Vanessa) Dykstra of Lynden, Brenda (Chris) Marks of Everson, Nate (Lacey) Libolt of Lynden, Aaron Libolt of Spokane and Ben Libolt of Lynden, great-grandchildren, Tony, Jayden, Roman and Jackson Libolt, Tate and Trent Dykstra, Taryn, Denten and Aidan Abercrombie, Weston Marks, and Boston, Keagan, Angus and Wyatt Libolt. The family would like to thank the staff of Meadow Greens and Christian Health Care Center for their care and support of Jack. Memorials may be made to St. Joseph Catholic Church in Lynden. Visitation will be held at Westford Funeral Home, 1301 Broadway St. in Bellingham on Sunday, May 17th from 1-3 PM. A private family burial service will be held. You may share memories with the family at www.westfordfuneralhome.com.

Jack Aubrey Libolt passed away peacefully at the age of 92 on May 12th, 2020. He will always be remembered for his loving smile, his warm little chuckle, and his unconditional love. When the family reflects over Dad&#8217;s life, words that... View Obituary & Service Information

The family of Jack Aubrey Libolt created this Life Tributes page to make it easy to share your memories.

Jack Aubrey Libolt passed away peacefully at the age of 92 on...