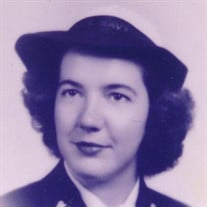 Irene McMurren, 97, passed away peacefully on April 7 in Bellingham, WA in her daughter’s home with her children attending. Irene was born in Stockton, California, to Charles Scott and Mabel (Morris) Scott, and graduated from Stockton High School in 1941. Irene served in the Navy during WWII, then worked for a newspaper, and the San Carlos Airport, California, where she learned to fly. It was there she met and married her husband Dale McMurren. She and Dale raised their children in Walnut Creek, California. They ran a commercial discing business. She was a homemaker, businesswoman, loving mother, grandmother and great-grandmother. Irene was a ‘human GPS’ and her navigation was without the aid of satellites. She always knew her location and said she did not worry about it. She was old-school effective and typewriter efficient without spell-check. Irene enjoyed travel, family history and gardening. She also kept up on the news of the day, combing through newspapers for articles of interest to share with her family. Irene moved to Bellingham in 2014 to be closer to her family, and enjoyed her friends and staff at The Willows. She enjoyed driving through farm country, viewing historic homes, riding the ferries, attending local plays, and visiting the tulip fields and local beaches. Irene is preceded in death by her husband Robert Dale McMurren, father Charles Scott, mother Mabel (Morris) Scott, brothers Phillip Scott, Albert Scott, Ike Scott, sister Mary Six, and grandson Samuel McMurren. She is survived by her son Alec McMurren (Nicole), daughter Kay McMurren, grandchildren George, Kelly and Matthew O’Connor, Anna Rogers (Matt), Isaac McMurren, and great-grandchildren Grace O’Connor Mitchell, Reza Rogers and her newest great-granddaughter, Ara Rogers, who came into this world as Irene was departing. There will be no memorial due to Covid-19. You may share memories with the family at www.westfordfuneralhome.com.

Irene McMurren, 97, passed away peacefully on April 7 in Bellingham, WA in her daughter&#8217;s home with her children attending. Irene was born in Stockton, California, to Charles Scott and Mabel (Morris) Scott, and graduated from Stockton... View Obituary & Service Information

The family of Irene Patricia McMurren created this Life Tributes page to make it easy to share your memories.

Irene McMurren, 97, passed away peacefully on April 7 in Bellingham,...