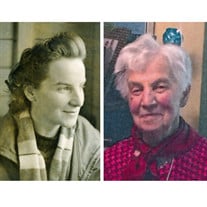 Hilde was born in Auschau-Am-Inn, Germany, a small village in Bavaria. She was the third of five siblings: 3 girls and two boys. My mother was a very feisty young girl, and the ringleader of all the village children. She often told me, her only child, of her magical childhood. She recounted many stories, such as sitting on the lid of the butter churn as it was cranked to make butter. At some point, the family thought Hilde would make a good nun, thus she went to a convent in a neighboring town for her education. However, following an incident (and possibly several in the same vein) where she threw her creamed spinach out of her second story window to land on an unsuspecting nun’s head, she and the headmistress together concluded a life wedded to Jesus was not for her. Following World War II, she was employed as a preschool teacher in Munich. This was perfect- she adored, and was adored in return by children. One day on a crowded train, she traded glances with a handsome young man. They spoke very little although before he exited he said, “If it’s meant to be, meet me next week at the train station near the Englishe Garten.” They met, subsequently married and emigrated to Venezuela and then Washington State where I, their only child, was born several weeks later. Having already become fluent in English, my parents became proud citizens as soon as possible. My mother was the most incredible mother. Her mission was to take care of me in the most loving, nurturing way possible. Her unique way of being continued with her son-in-law, Michael, grandchildren Alexander, Kevin and Matthew, as well as her daughter-in-law, Jenny. It would have continued with her first great-grandson whom was born on 8/4/2016. She was so delighted to know a baby was on the way. We celebrated my mother’s life with a special party for friends and family in early May when we learned she had cancer. She glowed that day with happiness and told me, “This was the best day of my life” even though “I didn’t know who all those people were.” The family will have a private ceremony at a later date. My mother was the 93 year-old woman you most likely met in the stores of Whatcom County whom marched up to parents and complimented them on their children in a fairly strong German accent. She was the confidante of her grandchildren; and listened empathetically to many with no need for accolades in return. We are so sad that a strong, outspoken woman, who lived such a rich and exciting life is no longer with us: to listen and console us with her words of wisdom. But we are so fortunate we were loved by her, and know she felt so very loved in return. Hilde was preceded in death by her husband Hans. She is survived by her daughter Esther Grummel, son-in-law Michael Grummel, grandsons Alexander and his wife Jenny Kay and their newborn son Soren Rockwell Grummel, Kevin Grummel and Matthew Grummel. She also has one surviving brother in Germany, as well as countless relatives and many dear neighbors and friends including those in the German Club and in her singing group. We would like to thank the staff of Orchard Park as well as Hospice for the true affection and care they gave to her. She felt loved and safe with all of you.

Hilde was born in Auschau-Am-Inn, Germany, a small village in Bavaria. She was the third of five siblings: 3 girls and two boys. My mother was a very feisty young girl, and the ringleader of all the village children. She often told me, her only... View Obituary & Service Information

The family of Hilde Heimhilger created this Life Tributes page to make it easy to share your memories.

Hilde was born in Auschau-Am-Inn, Germany, a small village in...