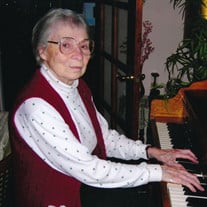 The beloved Mrs. Hazel Cantelon passed away with confident faith to be “present with the Lord” (II Corinthians 5:6-10) on August 2, 2017. Hazel was 99 years old, born September 18, 1917, the second child and only daughter of William A. Dunn (1888-1986) and Agnes M. Dunn (1892-1991) in Hawarden, Sask., Canada. She married Rev. Hugh D. Cantelon (1914-1993) on September 15, 1937 at Pense, Saskatchewan. Hazel is also preceded in death by her two brothers: Harold Redden Dunn (1914-2006) and Murray Stewart Dunn (1922-2010). Mrs. Cantelon is survived by her daughter and companion-caregiver, Ruth Faye Cantelon, her son, William “Bill” Howard Cantelon, and daughter-in-law Nadine (Flugekvam) Cantelon, their four children and spouses. Hazel was honored to be a grandmother and great-grandmother to: Kaylee and Gabrielle (parents, Marty and Pamela Cantelon); Lucas, Renae, and Michaela (parents, Nicole and Mike Houchen); Brynn and Ethan (parents, Jeremy and Roslyn Cantelon); and Lorelei (parents, Jessica and Scott Hogenson). Other survivors include seven nieces and seven nephews, within five related families: Harold and Sue (1919-2011) Dunn’s son, Brian; Murray and Betty (1918-1996) Dunn’s children, Gail (who photographed her Aunt Hazel, shown above, in 2009) and Jimmy; Bill (1908-1986) and Marie (1918-1990) Wotherspoon’s children: Beverly, Rosemarie, Larry, Clark, Rod, Chloe, and Jackie; Rev. Homer (1923-2014) and Shirley (1928-2013) Cantelon’s children, James, Murray, and Connie; Rev. Donald (1928-2008) and Ardena Cantelon’s children, Brent and Debra. As a teenager, Hazel completed her Canadian public education and graduated early from the Pense (Sask.) High School with excellence; but at age twelve, she had a life-changing experience. As Hazel retold, she attended a special meeting at a Nazarene Church in Regina, Sask. Before the missionary (to Japan) preached, the young people’s choir enthusiastically sang, “I’ll be a soldier for Jesus, no matter what the others will do!” At the close of the soul-stirring message, an invitation to go forward, to personally accept Jesus Christ as Savior and Lord, deeply stirred her heart. A nearby observant church lady walked directly to Hazel and asked if she would like to go to the front altar. Hazel immediately answered “yes” and went forward with her Dad. Along with church and family responsibilities, on June 1, 1964, Hazel extended her education and service by being granted Licensed Practical Nurse certification in the State of Washington. She was a faithful congregational pianist and assisted in various capacities in Christian ministry alongside her husband, Rev. Hugh D. Cantelon, who pastored churches affiliated with the Pentecostal Assemblies of God. For more than a decade, he served as an associate pastor of the former Calvary Temple, then located on 2014 C. Street, Bellingham (presently the Bellingham Municipal Court). While pastoring in Wolf Point, Montana, Hazel, her husband, and daughter Faye became United States citizens November 14, 1957. During retirement years, Mrs. Cantelon attended Northwest Baptist Church and was active in the Bellingham Salvation Army Corps with “League of Mercy” participants who visited and ministered to local nursing homes. Hazel’s favorite Bible verse is John 3:16. (KJV) “For God so loved the world that He gave His only begotten Son, that whosoever believeth in Him should not perish, but have everlasting life.” In memory of Hazel, it would be appreciated that donations be designated to The Gideons International by mail to The Gideons International, Bellingham Camp, Box 30093; Bellingham, WA 98228-2093 or online at www.gideons.org/sendtheword (toll-free: 866-382-4253). Along the “Last Mile of the Way”. . . deepest gratitude for Bellingham’s Broadway St. Fire Department Medics who responded with incredible promptness and professionalism; the devoted nursing staff of St. Joseph Hospital’s ER and Medical Unit 2, the ministry of Chaplain Daniel; Whatcom Cascade Ambulance attendants for their safe and courteous transportation. Hazel and daughter’s heartfelt appreciation for the at-home visits by Hospice team Nurse Michelle, Nurse Mary, Nurse Jenny, Nurse Ashtyn, Chaplain Jennifer, Summer, Ann, and Diana; and God Bless Whatcom Hospice House, where Psalm 23 became reality experienced. Memorial visitation will be hosted at Westford Funeral Home on Tuesday, August 8th from 1-4 PM. Graveside committal will be held on Wednesday, August 9th at 2 PM at Bethany Lutheran Cemetery, 3744 Mt. Baker Hwy. at Nugents Corner. Pastor Rev. Gilbert Gunderson will be officiating. You may share memories with the family at www.westfordfuneralhome.com.

The family of Hazel Cora Dunn Cantelon created this Life Tributes page to make it easy to share your memories.

The beloved Mrs. Hazel Cantelon passed away with confident faith...