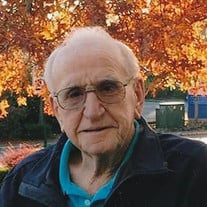 Harvey James “Jim” Perry, Jr., age 90, went to be with our Lord and Savior on Sunday, August 11, 2019. He was born November 8, 1928 in Ferndale, WA to Harvey and Theresa Perry. Jim grew up in Bellingham, graduating from Bellingham High School in 1946. He served in the US Army at the end the Korean war and was stationed in Germany. Jim later retired from Darigold after 38 years. He selflessly volunteered his time at the Geneva Fire Department where he became Fire Chief and later was appointed Commissioner of Fire District 2. His greatest passion was supporting his children, grandchildren and great-grandchildren in all their various activities. On May 5, 1990, Jim married Margaret "Marg" (Sealund) in Acme, WA. They loved spending time with family, RV’ing in Twenty-Nine Palms, CA, golfing, fishing and creating wood crafts together. Survived by his wife Marg, daughter Lesa Gilbert (Greg), sons Scott Noteboom (Tami), Alan Perry (Sue), Marg's daughters Diana Lautenbach (Ted), Linda VanKooten (Jerry), 11 grandchildren, 12 great-grandchildren, 4 great-great-grandchildren, sister Judy Weaver (Ed) and numerous nieces and nephews. Jim was preceded in death by his 7 of 8 siblings and Marg's son Terry Sealund and his son Tony. Memorials may be made in Jim’s name to St. Jude’s Children’s Research Hospital, or Laurel Fire Department. A funeral service will be held at Westford Funeral Home on Monday, August 19th at 11 AM. A reception will follow across the street at Westford's Broadway Hall. Committal will follow at Greenacres Memorial Park. You may share memories with the family at www.westfordfuneralhome.com.

The family of Harvey James "Jim" Perry created this Life Tributes page to make it easy to share your memories.