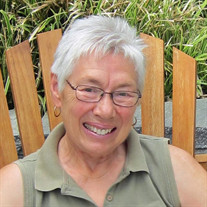 Harriet A. Spanel died at home in Bellingham, Washington, on February 2, 2016, at the age of 77, surrounded by family and friends. Born Harriet Rosa Albertsen to Harry and Rosa Albertsen in Audubon, Iowa, on January 15, 1939, she was the second of four children. She grew up on the family farm in rural Iowa, where she worked along with her siblings in the cornfields, baling hay and cleaning out the chicken coops. In high school, she played basketball, participated in student government and was her graduating class valedictorian. Following high school, she continued her education at Iowa State University in Ames. She graduated from Iowa State University in 1961 with a degree in mathematics. In that same year, she married her husband Les, who was completing his PhD in physics at Iowa State. After college, she worked as a computer programmer for the Atomic Energy Commission at the Ames National Lab. After starting a family, Harriet and Les moved to Bellevue, Washington, in 1964, when Les took a job as a research engineer at Boeing. It was in Bellevue that her involvement as a community activist and leader began. After being intrigued by a brochure she received with information about the Bellevue area, she joined the League of Women Voters, an organization she was a part of for over 50 years. In 1968, the family moved to Bellingham, when Les began his teaching career at Western Washington University in the Physics Department. Harriet continued her involvement with the League of Women Voters in Bellingham by helping to register voters, organizing election forums and serving as the local chapter president for several years. Harriet also jumped into other volunteer activities and issues in the city. She worked with her local Catholic church in community support and family programs and was the chairperson for the Adult Education Council of the archdiocese in 1978. She was also part of the Nuclear Freeze movement in the 1970s and began her involvement with local government by lobbying the city council and city administration on important neighborhood issues. She followed that by serving on the Bellingham Planning Commission, where eventually she served as chair, and then serving on the Bellingham Parks and Recreation Board. Harriet said that her enrollment in a class at Fairhaven College was a life-changing experience that led her to seek political office and fulfill her passion to help the community. She ran for and was elected to the Washington State Legislature, where she served three terms in the House of Representatives starting in 1987. She followed that by serving four terms in the Washington State Senate from 1993 to 2009. Harriet represented the 40th Legislative District, which includes parts of Whatcom and Skagit counties along with all of San Juan County. During her 22-year legislative career, Harriet was passionate about many issues affecting both her district and the state of Washington. In particular, she was a consistent and strong advocate for the preservation of our environment and natural resources, for women’s and children’s issues, education, transportation and overall responsible government. Harriet was a leader in the Washington State Senate and was the majority caucus chair for the ten years preceding her retirement. After retirement, she continued to be active on both the state and community levels, serving in numerous organizations, such as the Pacific States Marine Fisheries Commission and her local Sehome Neighborhood Board. She instilled in her children and other family members a sense of adventure and a love of travel. In 1974, Harriet and Les took the family on an eight-month backpacking trip around the Pacific Rim, visiting many countries in Asia and the South Pacific. She also traveled many times to Denmark and other parts of Europe to visit relatives and friends. In 1982, Harriet, Les and their daughter Kristine spent a year in Sweden as part of a teaching exchange program. She continued to travel extensively up until her death and always seemed to have several trips in the planning stage. Harriet is survived by son Philip Spanel (wife Meilani Obra), son David Spanel (wife Maria) and their sons Patrick and Mitchell, daughter Kristine Huntwork and her children Tyler and Amanda, sisters Dorothy Hawkes (husband Bill) and Betty Price, brother Franklin Albertsen (wife Becky), and many loving relatives and friends. She was preceded in death by her husband of 41 years, Leslie Spanel, in 2002, and by her parents. A Funeral Mass in celebration of Harriet’s life will be held on Saturday, February 20, 2016, at 10:30 am at Church of the Assumption, 2116 Cornwall Avenue, in Bellingham. A reception will follow. The family asks that, in lieu of flowers, contributions may be made to any of Harriet’s favorite causes: Dr. Leslie Spanel Memorial Planetarium Endowment, c/o WWUFoundation. Whatcom Hospice Whatcom Land Trust San Juan Preservation Trust Skagit Land Trust Museum of Danish America, Elk Horn, IA

Harriet A. Spanel died at home in Bellingham, Washington, on February 2, 2016, at the age of 77, surrounded by family and friends. Born Harriet Rosa Albertsen to Harry and Rosa Albertsen in Audubon, Iowa, on January 15, 1939, she was the second... View Obituary & Service Information

The family of Harriet A. Spanel created this Life Tributes page to make it easy to share your memories.

Harriet A. Spanel died at home in Bellingham, Washington, on...