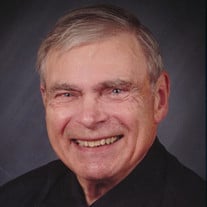 Beloved husband, father, brother, and grandfather, Harlan Todahl went to heaven on Monday, May 22, 2017 in Bellingham, WA. He was born April 3, 1936 in Bellingham to Elroy and Geneva (Newell) Todahl. He was a lifelong resident of Whatcom County. Harlan graduated from Bellingham High School and Western Washington University and taught English, Drama and Driver’s Education at Nooksack Jr./Sr. High School for 28 years. He loved drama and poetry and directed the Nooksack High School play for many years. After he retired from Nooksack High School, he worked for 22 years as a security guard for Security Specialists Plus. He loved that work and the people entering and exiting Bellingham Cold Storage. He married the love of his life, Vera Vitaljic, on August 7, 1960 – they were together, and dear friends, for 57 years. He was a gifted vegetable and dahlia gardener and shared his harvest widely with local churches, community groups, family, friends and everyone who stopped by. He attended St. Joseph’s Catholic Church in Lynden for much of his adult life. He was very well loved for his joyful smile and his gregarious and generous personality. We will miss his wonderful sense of humor and ability to light up the room with stories from his childhood, and tales of adventures and near misses across his 25-year career as a driver education instructor. He was preceded in death by brother, Doug Williams, and sister, Linda Norris; brothers-in-law Larry Johnson and Jim Bailey; and sister-in-law Betty Todahl. Harlan is survived by his wife Vera; children, Diane (Bill) VanDiest, Jeff (Gwyn) Todahl, Mark Todahl, and Teresa Erickson; grandchildren, Ryan (Megan) VanDiest, Kellie (Lawrence) VanDiest, Stacie VanDiest, Sam Todahl, Drew Todahl, and Bennett DeLong; great grandchildren, Leah, Brielle, Kyler, Brenyn, and Jace; brothers, Marlyn (Mary) Todahl, Bill Todahl, and sisters Sharon Bailey and Colleen Johnson; brother-in-law Don Norris; and numerous nieces and nephews. Memorials may be made to Nooksack Valley Food Bank, (360) 966-4833; Address: 204 N Washington St. Everson, WA 98247. A Mass of Christian Burial will be held 11:00 a.m., Friday, May 26, 2017 at St. Joseph Catholic Church in Lynden, WA. You may share your memories of Harlan at www.westfordfuneralhome.com.

Beloved husband, father, brother, and grandfather, Harlan Todahl went to heaven on Monday, May 22, 2017 in Bellingham, WA. He was born April 3, 1936 in Bellingham to Elroy and Geneva (Newell) Todahl. He was a lifelong resident of Whatcom County.... View Obituary & Service Information

The family of Harlan R. Todahl created this Life Tributes page to make it easy to share your memories.