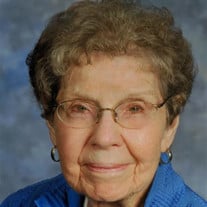 Grace Patricia “Peggy” Ott (Campbell) of Bellingham, Washington died peacefully at her home on Friday, May 18, 2018 at the age of 101, in the company of her son, Chris Ott. Peggy was born on February 9, 1917 in Bremerton, Washington, the daughter of Paul James “Doc” Campbell and Nellie Grace “Grace” Campbell (Casady). An older brother, Paul Edmond, died in 1918, leaving Grace the eldest and eventual matriarch in her family of five brothers (all now deceased) and one sister: Dick Campbell, Harold Campbell, Bill Campbell, George Campbell, Clare Clausen, and Pete Campbell. Peggy grew up in Bremerton, assisting her mother in the raising of her younger siblings and her father in his dental practice. She attended Lady Star of Sea elementary school and was graduated from Bremerton High School in 1935. In 1940 she married her loving husband of more than 63 years, Joseph “Joe” Ott, who preceded her in death in 2003. Peggy and Joe raised their two sons, Jim and Chris, primarily in Bellingham, and together they built and sustained their family business, Ott’s Welding and Machine Works, which they began in 1950. Peggy kept the books for the business until Joe’s retirement in 1980. Peggy was a faithful member of Assumption Catholic Church. She was an active member of the Assumption School Parents Club, a skilled and avid knitter, an impeccable homemaker, a stylish dresser, and a good friend to many. Each sweater she knit was a small work of art, and she donated many baby sweaters and blankets to the church. A survivor of both cancer and heart disease, she set an example to her family for both adaptability and healthy living by changing her diet and taking up daily walks later in her life. She took her greatest pride in her family; a highlight of each year since the early 1980s was presiding over the Campbell family picnic as the family’s eldest member, at which five generations of Campbells now gather. Peggy is survived by her sons; Jim’s wife Marianne; her grandchildren and their spouses: Joe Ott, Rita Ott Ramstad, Katie Ott (Knengi Martin), Julie Ott, and Jackie Pedraza (Tony); and her great-grandchildren: Will Ramstad, Grace Ramstad, Maia Ott, Eric Ott, Ada Hicks, Taylor Brock, Kameron Pedraza, and Isaac Pedraza. She was preceded in death by her grandson, Eric Ott, and is also survived by his wife, Monique Ott-Beacham. In addition to her immediate descendants, Peggy is survived by her sister, Clare Clausen, and numerous nieces and nephews. A vigil prayer service will be held at Westford Funeral Home on Wednesday, May 30 at 6 PM. Mass of Christian Burial will be held at Church of the Assumption on Thursday, May 31 at 10:30 AM. A reception will follow at the church. You may share memories with the family at www.westfordfuneralhome.com.

The family of Grace Patricia "Peggy" Ott created this Life Tributes page to make it easy to share your memories.