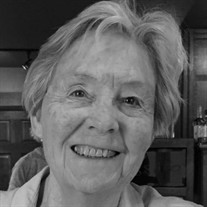 Gloria Craven, 92, of Bellingham, WA died early on March 29, 2022, surrounded by family at Whatcom Hospice House from complications of heart disease. She was born in Durango, Colorado on December 27, 1929 to William and Dorothy Dixon Pheney who had two other daughters, Gail (Rowan) and Dorothy “Dixie” (Lemon). Her family re-located to Omaha, Nebraska where Gloria graduated from University of Nebraska, Omaha. In November, 1951, she married James C. Craven from Springfield, IL. Gail had married Tom Rowan and they introduced Gloria to Jim Craven, a friend of Tom’s from college and from their military service in Japan at the end of World War II. Gloria and Jim settled in Springfield and raised four children, all of whom survive: William (Terri Tork) of Bellingham, Nancy (James Claypool) of Portland OR, Donald (Denise) Craven of Springfield IL, and Rebecca (Scott Linneman) of Bellingham. She is also survived by her sister Dixie, grandchildren Joseph (Alyssa) and David Craven, Anna and Meg Claypool, and Charles and Dorothy Linneman and one great-grandchild, James Craven. Her husband, an attorney and retired appellate court judge, died in 2015. Gloria was a very active parent to her children, all of whom participated in a wide variety of sports, music, scouting, and other activities, including many extended family camping vacations across most of the United States. Jim and Gloria enjoyed many trips to Sanibel Island, Florida with the Rowans, and sailing on Lake Champlain with Gloria’s sister Dixie and her husband, Dr. Henry Lemon. All four of Gloria’s children attended college and law school. Gloria was active with several civic organizations in Illinois, especially the League of Women Voters, where she became the state vice president at the time when the Equal Rights Amendment was before the Illinois General Assembly. Gloria actively lobbied for the ERA for several years in what was a key state for the passage of that constitutional amendment which ultimately did not pass in Illinois until 2018. Meanwhile, she had returned to college to complete a Master’s degree in Public Administration from Sangamon State University in Springfield. She resigned from the League of Women Voters to become the assistant to the Deputy Director of the Illinois Environmental Protection Agency where she was the liaison between the agency and public groups including the state legislature. Upon the retirement of her husband, Gloria and Jim moved to Ashland, OR where they lived for several years and enjoyed the sun, the Shakespeare, and the company of many friends and visitors. In 2011, they moved to Bellingham to be near (and to be cared for by) her daughter Rebecca and her family in their home overlooking Bellingham Bay. Gloria enjoyed three-generation living. She became an uncanny forecaster of spectacular sunsets and rarely missed an evening update with Judy Woodruff. She was a keen student of national and world events. Gloria enjoyed many classes with the Academy of Lifelong Learning and, as a voracious reader, was part of several book clubs. She fell in with a rowdy group of WWU retirees and enjoyed their companionship immensely. At her request there will be no services. The family will gather for a private celebration of life at a later date. In lieu of flowers, please consider memorial contributions to the Whatcom Land Trust, the Bellingham Public Library fund at the Whatcom Community Foundation, the Bellingham Food Bank, or the charity of your choice.

Gloria Craven, 92, of Bellingham, WA died early on March 29, 2022, surrounded by family at Whatcom Hospice House from complications of heart disease. She was born in Durango, Colorado on December 27, 1929 to William and Dorothy Dixon Pheney... View Obituary & Service Information

The family of Gloria Craven created this Life Tributes page to make it easy to share your memories.