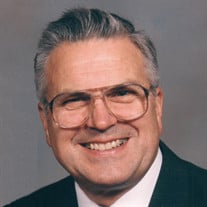 Glenn Eastwood, age 84, passed away on Sunday, July 15, 2018 in Bellingham. He was born May 18, 1934 in Bellingham, WA at St. Francis Hospital (now Columbia Place) to Clarence and Jessie Eastwood. Glenn graduated from Ferndale High School in 1952 and attended three quarters at WWU before marrying Naoma Fralick on April 10, 1954. Glenn was a talented woodworker, a trade he learned from his father-in-law, Earl Fralick, who he worked with for 15 years before becoming a supervisor at Uniflight Boat Builders. He started his own business in 1985 installing laminate and tile, with woodworking on the side. He later progressed to focusing solely on woodworking, caning chairs, and restoring damaged furniture. He possessed the unique skill of recreating broken or missing pieces. Glenn served 12 years in the US Naval Reserves. He was active in the Bellingham Theatre Guild and later the Whatcom Historical Society. Glenn and Naoma were active members of Garden St. United Methodist Church and later Calvary Temple (now Life Church Bayside). Glenn shared his interest in the circus with his granddaughter, Katlyn. He also enjoyed photography, boats, trains, and carving carousel horses. He will long be remembered for whistling while he worked in his shop or yard and being a great storyteller. Glenn loved spending time with his children and grandchildren. He was preceded in death by his wife Naoma, and sister, Betty Swanson. Glenn is survived by his daughters Janet Wheeler (Bruce), Patricia Eastwood, and Nancy Clark (John); grandchildren Brandon Wright (Amy), Hilary Wright, Cody Clark (Melissa), Katlyn Clark, Kylee Carter (William); great-grandchildren Sam, Gideon, Hallie, Molly, Elizabeth, Magnus, Adler, and Amalie; and many relatives and friends. A Service of Remembrance will be held at Westford’s Broadway Hall, 1300 Broadway in Bellingham on Friday, July 20th at 11 AM. Reception following. You may share memories at www.westfordfuneralhome.com.

Glenn Eastwood, age 84, passed away on Sunday, July 15, 2018 in Bellingham. He was born May 18, 1934 in Bellingham, WA at St. Francis Hospital (now Columbia Place) to Clarence and Jessie Eastwood. Glenn graduated from Ferndale High School in... View Obituary & Service Information

The family of Glenn M Eastwood created this Life Tributes page to make it easy to share your memories.