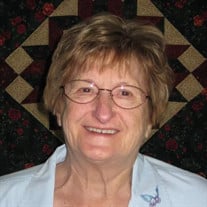 Gladys Margaret (Schwahn) Libolt passed away peacefully at the age of 86 on June 6, 2022. She was born to Joseph and Mary Schwahn in Ridgeview, SD on October 19, 1935, the fourth of ten children. She graduated from Eagle Butte High School in 1955 and soon after married Jack Aubrey Libolt. They had two children before moving to Cody, WY, where they added two more to the family. Gladys learned to sew and knit at a very young age and she mastered her craft while growing up. Due to the struggles of a large family in a rural area she learned to make alterations and create new clothes from patterns for herself as well as her siblings. While she lived in Cody, she ran a knitting and sewing shop out of her house. The family moved to Lynden, WA in 1973 and she began Sunshine Upholstery. That business evolved into Calico Curtains as she supplied draperies for homes in the area. Later she did custom embroidery and quilts. Although she had many businesses, she enjoyed helping others. She opened up her shop to a group of friends and they made sleeping bags and stocking hats for the homeless. She also gave many quilts away to her kids, grandkids, and friends. Gladys was very creative, loved to give, and will be dearly missed. Gladys was preceded in death by her parents; husband of 62 years, Jack; siblings, Sally Libolt, Don Schwahn, Richard Schwahn, and Edmund Schwahn. She is survived by her son, Les (Colette) Libolt of Seattle, daughter Peggy (Duke) Dykstra of Lynden, son Clyde (Gladys) Libolt of Lynden, and son Joe (Leora) Libolt of Birch Bay, grandchildren, Amy Libolt of Seattle, Patrick Libolt of Seattle, Jackie (Jake) Abercrombie of Lynden, Brian (Vanessa) Dykstra of Lynden, Brenda (Chris) Marks of Everson, Nate (Lacey) Libolt of Lynden, Aaron Libolt (fiancée Megan Lindsay) of Renton and Ben Libolt of Lynden, great-grandchildren, Tony, Jayden, Roman and Jackson Libolt, Tate and Trent Dykstra, Taryn, Denten and Aidan Abercrombie, Weston Marks, and Boston, Keagan, Angus and Wyatt Libolt, siblings Clem Schwahn, Charles (Gen) Schwahn, Jerry (Sheryle) Schwahn, Arlene Watts (Don Petermann), and Mary Jane Fine. A visitation will be held on Monday, June 13th from 5pm-7pm at Westford Funeral Home. A memorial service will be Tuesday, June 14th at 3pm at Faith Reformed Church, 300 7th St, Lynden. You may share memories at www.westfordfuneralhome.com.

Gladys Margaret (Schwahn) Libolt passed away peacefully at the age of 86 on June 6, 2022. She was born to Joseph and Mary Schwahn in Ridgeview, SD on October 19, 1935, the fourth of ten children. She graduated from Eagle Butte High School in... View Obituary & Service Information

The family of Gladys Margaret Libolt created this Life Tributes page to make it easy to share your memories.

Gladys Margaret (Schwahn) Libolt passed away peacefully at the...