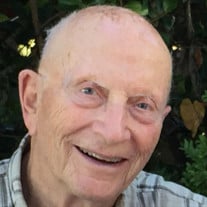 Gerald “Jerry” Main was born Dec. 11, 1927 to H. Rolland Main and Charlotte (Kammerzell) Main, in Bellingham, WA. He died Dec. 25, 2019 at age 92. He had one sister, Mary L. Main Barger (1923-2015). Jerry was a devoted husband and father and cherished by all of his friends and family. He was a beacon of integrity and faith and will leave a legacy of love and strong moral values. A lifetime resident of Bellingham, Jerry’s early education was at Washington Grade School, Campus School and Bellingham High School before entering ROTC at New Mexico Military Institute in Roswell, NM at age 16. After graduating from NMMI in 1945 he entered ROTC at University of Washington and was a member of Sigma Alpha Epsilon fraternity where he made lifelong friends. In 1949 Jerry graduated from the University of Washington where he met and fell in love with his future wife Marian J. Jellison. Both earned the first time offered degree in Business Administration. Jerry returned to Bellingham and joined his father in the family lumber brokerage business where they worked together for 13 years. He then became the owner of Bellingham Lumber & Shingle Co. in 1964. On August 23, 1952 Jerry and Marian were married. They have five children, Teresa (Tobey) Gelder of Lynden, Mandy (Tom) Minderhout of Rancho Mirage, CA, Barbara (Chris) Hill of Santa Barbara, CA, Mike (Jeannene) Main of Lexington, SC, and Mickey (Mike) Middendorf of Bellingham, 13 grandchildren, 2 great-grandchildren, and numerous nieces and nephews also mourn this loss. His beloved wife of 60 years, Marian passed away in May 2012. Jerry was a survivor of polio in 1955. His recovery was made possible by the YMCA, and his own determination to stay fit all his life. He was an avid handball player, jogger, golfer, and a member of Bellingham Tennis Club where he played until he was 90 years old. The Main family are all passionate about boating in the San Juan and Gulf Islands. Jerry started with a dingy on Chuckanut Bay, advancing to a Dragon Class sailboat, and eventually a power boat for the whole family to enjoy. His involvement in numerous business ventures with a Canadian partner kept Jerry busy during his working years. The projects include housing developments, the Biltmore Hotel in Vancouver, a shopping center and hotel in B.C., modular housing in Texas as well as his local lumber shipping business and several lumber mills in Canada. Jerry was a Rotarian, past Commodore of the Bellingham Yacht Club (1955), member of the Bellingham Country Club, Director of Bellingham National Bank, Board Member of YMCA, Board Member of Campus Christian Ministries, director of United Good Neighbor fund drive, President of St. Vincent de Paul Society at Sacred Heart Catholic Church and numerous other charities and organizations over his long lifetime. Memorials in Jerry’s name may be made to the YMCA. Mass of Christian Burial will be held at Sacred Heart Catholic Church on Monday, January 6th at 11 AM. Reception will follow at the church. You may share memories with the family at www.westfordfuneralhome.com.

The family of Gerald E. Main created this Life Tributes page to make it easy to share your memories.