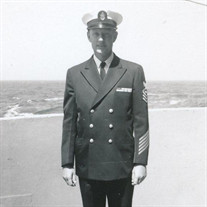 Chief Radioman George Albert Miles, USN, Ret., passed away on September 29, 2020 in Bellingham. He was born June 23, 1923 in Eldorado, AR to Godfrey and Olive (Preston) Miles. He married the love of his life, Marie Zentackos, in Boston, MA. George proudly served in the US Navy for 20 years, retiring as a Chief Radioman. George served on the USS Antares during the attack on Pearl Harbor, while being just eighteen years old. He later served in the Korean War. George loved geology and gold panning with his friend Bob, and raising horses. After retiring from the Navy, George bought a small farm on West Laurel Road. George went on to make a wonderful life for his family. George took a job as cook on a purse seiner out of Blaine. After a year of fishing George landed a Job with Intalco, retiring after 20 years. George spent the remainder of his life on his beloved farm with his wife and family. His family will miss his kindness, his smile, and his wonderful laugh. George was preceded in death by his sister Patricia and his brother Gene. He is survived by his loving wife Marie, his three children, Art Miles, Eddree Miles and Godfrey Miles, grandchildren Chad Macy, Nicole Adelstein (Ken), Collin Potts (Nikki), Zoe Miles and Stam Jamchat, twin step-sisters Grace Carlson Curtis and Elsie Carlson Melanson, and many loving friends. George was a true patriot and hero who loved his country. A graveside service with military honors will be held at Greenwood Cemetery in Lynden at 1 PM on Monday, October 5th. Fr. Michael Tervo will be officiating. You may share memories with the family at www.westfordfuneralhome.com.

Chief Radioman George Albert Miles, USN, Ret., passed away on September 29, 2020 in Bellingham. He was born June 23, 1923 in Eldorado, AR to Godfrey and Olive (Preston) Miles. He married the love of his life, Marie Zentackos, in Boston, MA.... View Obituary & Service Information

The family of George Albert Miles created this Life Tributes page to make it easy to share your memories.