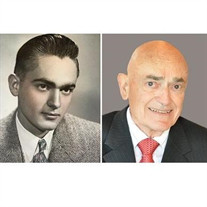 George Costello, age 85, of Bellingham, WA passed away peacefully on August 6, 2016. George was born to Peter and Rosa (Erceg) Costello in Bellingham on October 10, 1930. George attended Lowell Elementary, Fairhaven Jr. High and Bellingham High School. George was in the fishing industry for his entire career. He, along with friends Martin and Steve Kuljis, owned and operated Sea-K Fish Company in Blaine and Sausalito, CA. George was passionate about his family, his friends, and his family roots in Montenegro. He enjoyed watching baseball and helping those less fortunate. George was preceded in death by his wife Kay Costello, wife Kathryn Costello, brother Tripo, sister Merolin, and son-in-law Rick Miller. He is survived by his children Michelle Miller, Mike (Jane) Costello, Marcia (Tony) Zankich, Milissa (Fred) Miller, Martin Costello and Margaret “Maggie” (Von) Smith, 14 grandchildren, 5 great-grandchildren, and many loving relatives and friends. A Vigil Service will be held at Westford Funeral Home at 7 PM on Thursday, August 11th. Mass of Christian Burial will be held at Church of the Assumption at 10:30 AM on Friday, August 12th with a reception following at the church. Burial will follow at Bayview Cemetery. The family wishes to thank the staff at Mt. Baker Care Center for their loving care for George over the last month. Memorials may be made to Whatcom Hospice.

The family of George P. Costello created this Life Tributes page to make it easy to share your memories.