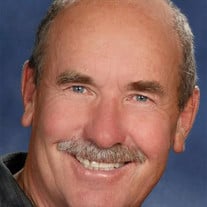 Mick Butenschoen, age 74, passed away peacefully surrounded by his family on November 21st, 2019, after a month long battle with cancer. He was the oldest of 11 children born to George and Shirley (Catlin) Butenschoen in Milbank, SD. In the spring of 1946 they moved to Bellingham where he resided for the remainder of his life. He attended Assumption School and Meridian High School. Mick enlisted in the US Army in October of 1963 and served in Germany and Korea. He was honorably discharged in October of 1966. Following his years in the military he joined the Local 26 (formerly Local 40) plumbers and pipefitters trade where he worked in the industry for 40 years. He retired in 2008 and spent his time doing what he loved the most- making memories with his family. These cherished memories included fishing, camping, crabbing, attending his grandchildren’s sporting events, embarking on new adventures, and watching NFL games on Sunday- go Pats! He was preceded in death by his father George, Myrna’s parents John and Grace Hogan and brothers-in-law Jim Walker, Don Randall and Jerry Doyle. Mick is survived by his mother Shirley; his beloved wife of over 48 years, Myrna; his loving children Michael (Tara), Jamie (Michael) Cordes and Ryan (Stephanie); his treasured grandchildren Kaylie (Chris), Kaitlen (Stephen), Christian, Matthew, Madisyn, Mallory, Mason, Kyle, Gabriel and Gavin. Mick will forever be remembered by his loving siblings Caroline (Rod), Pam (Warren), Linda, Alana, Janis, Gina (Mike), Tammie, Mary (Joey), Mark and Scott (Janet), along with countless lifelong friends and family whom were blessed to know him. An informal celebration of Mick’s life with sharing time will be held at 6 pm on Monday, December 2nd, 2019, at Westford Funeral Home, 1301 Broadway St. in Bellingham. Mass of Christian Burial will be held at 10:30 am on Tuesday, December 3rd, 2019 at Church of the Assumption, 2116 Cornwall Ave. in Bellingham followed by a 12 noon burial with military honors at Greenacres Cemetery, 5700 Northwest Ave. in Ferndale. A reception will follow at Broadway Hall, 1300 Broadway St. in Bellingham. Memorials may be made to the Virginia Mason Foundation or the Special Olympics.

Mick Butenschoen, age 74, passed away peacefully surrounded by his family on November 21st, 2019, after a month long battle with cancer. He was the oldest of 11 children born to George and Shirley (Catlin) Butenschoen in Milbank, SD. In the... View Obituary & Service Information

The family of George Michael "Mick" Butenschoen created this Life Tributes page to make it easy to share your memories.