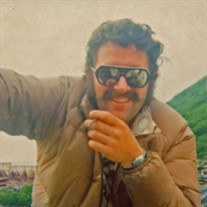 Gary Hougen, age 82, of Bellingham, WA passed away Monday, November 9, 2015 in Bellingham. Gary was born Oct 30, 1933 and grew up in Whatcom County. After graduating from BHS he joined the USAF (under a bit of protest) and served in Korea. Gary spent most of his life commercial fishing, first out of Bellingham. After marrying Carmen Lunde, he went to fish in Kodiak, AK and the Bering Sea. He skippered a number of draggers, shrimpers, and lastly a gill net salmon boat in Puget Sound. He survived three boats that sank (one in the Pacific and two in the Bering Sea) and then survived for nearly 17 years after a lung cancer operation. Gary loved to hunt, and introduced hunting to his brother Jack by letting him be his retriever when he was duck hunting. Once he called BHS and pulled Jack out of class for a family emergency (he had 5 ducks down in a pond near Kendall and told Jack to grab the wetsuit). Heather wrote on Facebook “When I was a kid, I was spoiled by my uncle Gary who took my sister and I to “Grant’s” for burgers and shakes. When we blew out our straws, $50 came out. I thought he was the coolest. A Rebel.” Renee wrote on Facebook “Thanks Uncle Gary for being so cool, for having a laugh that lit up a room… for helping me practice counting all the way to 100 so I could pass kindergarten, for teaching me to play cribbage and shuffle cards like a boss, and for loving my family.” Gary is survived by his daughter Samantha Pinto, brothers Jack Crandall, Ken Hougan, Stewart Hougen, and Larry Hougen, sister Sally Crandall, nieces Renee Miles, Heather Foster, Carlene Coleman, and Barbara Hackler, nephews Kyle Lunde and Mike Johnson, grandchildren Aurora and Summer Pinto, and the love of his life Carmen Lunde. An Irish Wake will be held at the Crandall’s, 5381 Belfern Dr., Bellingham for friends and family starting at 3:00 PM on the 17th of December. In lieu of flowers we request a donation to Hospice House of Bellingham.

Gary Hougen, age 82, of Bellingham, WA passed away Monday, November 9, 2015 in Bellingham. Gary was born Oct 30, 1933 and grew up in Whatcom County. After graduating from BHS he joined the USAF (under a bit of protest) and served in Korea. Gary... View Obituary & Service Information

The family of Gary Hougen created this Life Tributes page to make it easy to share your memories.