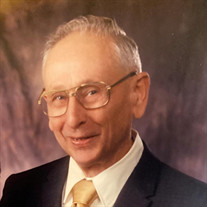 Francis (Frank) J. Heller, age 96, passed away peacefully in Bellingham on December 1, 2020. Frank was born on January 4, 1924 in Silver Lake, WA to Noah and Agnes Heller. After graduating from high school Frank served two years as a combat infantryman in the 32nd Division of the armed services where he earned numerous awards, including a bronze star, for his involvement in the liberation of the Philippines and the army occupation of Japan. Frank loved to tell stories about his service days and the various countries he was able to experience, including New Guinea, Philippines and Japan. Upon returning from the service, Frank married Gertrude Franzen on May 8, 1948 in Columbia Valley and they raised five sons and a daughter on the farm in Kendall that had been in the Franzen family since 1911. In addition to maintaining the farm, Frank worked various jobs including logging, mill work and for the Columbia Cement Quarry where he worked until he retired. Frank loved to hunt and fish and introduced those sports to his children. A favorite ritual was the annual fishing trip to Nimpo Lake in British Columbia, which he was able to do until age 92. Frank was also one of the founding members of the Kendall Volunteer Fire Department, for which he proudly served as a firefighter for 20 years until he retired in 1989. Frank and Gertrude were active, lifetime, members of St. Peter’s Catholic Church in Deming. Frank was predeceased by his wife, parents, one brother and three sisters. He is survived by his six children, Joe (Charlene) Heller, Ray Heller (Nancy Waligory), Tom (Kim) Heller, Ron (Debbie) Heller, Mary (Bruce) Vincent, and Mike (Joye) Heller, nine grandchildren, five great-grandchildren, two great-great grandchildren, one sister (Dorothy Courtman), one brother (Bob Heller) and many loving relatives and friends. A graveside service with military honors will be held at 1:00 pm on Monday, December 7th at St. Peter’s Cemetery in Columbia Valley on the Heady Road. Please obey the Governor’s rules on social distancing. Memorials may be made to Kendall Fire Department.

The family of Frank J. Heller created this Life Tributes page to make it easy to share your memories.