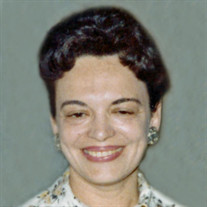 Florence Colovos passed away December 4, 2015 in Prineville, OR with family at her side. She was born September 8, 1921 to John and Josephine (Salico) Tomillo in Dunmore, PA. She grew up the oldest of 6 children, in a loving Italian family. She attended school in Scranton, PA and completed college courses at Keystone Community College before taking a job in NYC. It was on a return trip to New York that she met her husband. The doors of the train were beginning to close, when a duffel bag was thrown in between them. As the doors reopened, there stood a handsome man in uniform, with wings on his lapel. After a whirl wind courtship, she married George Colovos, and followed him from one base to another until he completed his advanced pilot training and deployed. Returning to Scranton, she, like so many wives of the “Greatest Generation” waited for his return. After the war they reunited and worked together in the hotel and restaurant business. She was the lovely and beautiful hostess or when needed waitress, cook or hotel switchboard operator. They were a team promoting and running the Twin Grill and the Europa Lounge in Scranton, and Wilkes Barre, PA and the High Point Inn in Mt. Pocono, PA. Their last restaurant, the Cinnabar and Ochoco Inn was located in Prineville, OR. But Flo was also a mother and along the way she raised three children. She was a beautiful and loving mother, devoted wife of 67 years, and will be dearly missed. She was preceded in death by her husband George and her siblings, Mary, Antoinette, Jerry and Ronnie. She is survived by her children Cherie (Andy) Webster, George Colovos, Jr. and Andrea (Glenn) Craley, nine grandchildren and 16 great-grandchildren; Carrie Webster (daughter Taylor) Bellingham, WA; Michael and Nicole Colovos (children Max, Finn, Arlo) of NYC; Amanda and Matt Glenovich (daughter Frankie); Amy and Thad Swanson (children Conner and Harper) Seattle, WA; Zach and Kat Craley Los Angeles, CA; Reed Colovos (son Brogan), Chris and Leslie Colovos (children Emmett, Wylie, Paisley, Jozie), Nick and Shyla Colovos (daughter Khloe) Prineville, OR; Marcelle and Josh Howard (children Tula, Tomilla, Walker) Bend, OR. She is also survived by her sister Joan (Joe) McDonnell and sister-in-law Juana Chappen of Scranton. The Family would like to thank all who cared for Mother at Ochoco Assisted Living Facility, Terry Badgett, and care givers of Millcreek Lodge II, Ginger of St. Charles Hospice, in Prineville, OR, and Terry Richards and Melissa Adams of Social Services. These are devoted, wonderful people, and we were blessed to have them at our Mother’s side. Memorials may be made to St. Charles Hospice, 1201 NE Elm St., Prineville, OR 97754. To contact her children, Andrea Craley 505-920-1858, George Colovos, Jr. 541-420-0544, Cherie Webster 360-739-3370.

Florence Colovos passed away December 4, 2015 in Prineville, OR with family at her side. She was born September 8, 1921 to John and Josephine (Salico) Tomillo in Dunmore, PA. She grew up the oldest of 6 children, in a loving Italian family.... View Obituary & Service Information

The family of Florence Colovos created this Life Tributes page to make it easy to share your memories.