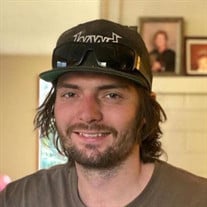 Evan Joseph Sobjack passed away after a boating accident on April 14, 2020 in Bellingham. He was born on October 4, 1991 in Khmelnytskyy, Ukraine and was adopted when he was 13 months old by his loving parents, Brad and Barbara (Heisey) Sobjack. Evan loved the outdoors and enjoyed commercial crabbing with his dad in Alaska and in Puget Sound. Evan started playing football when he was seven, and had a lifelong love of the sport. He was an avid dirt bike rider and liked to ride with friends, his dad and his uncle Todd. He worked as a plumber’s apprentice at Orca Plumbing for “Hebert”, the “oldest active and best journeyman” in Whatcom County. Evan’s real love was snowboarding. He could be seen catching huge air and making it look so easy at Mt. Baker whenever he got the chance. He loved the community of riders and knew all the regulars. He recently bragged about riding the closing day at Baker and then the next day he hit closing day at Stevens. On his last day at Baker he went “bigger” than he ever had. He was always looking for a new snowboarding adventure. He spent time in Chile and Japan, and most recently had a backcountry trip planned in Canada with his brother-in-law Jason, before the virus forced him and his friends to cancel the trip. He was a friend to everyone, had a huge heart and was a genuine person. Evan is survived by his parents Brad and Barbara Sobjack, grandmother Arlene Heisey, siblings Curtis (Laura) Lawyer, Alisa (Jason) Gayler and Chuck (Stephanie) Helms, nieces and nephews Roland, Jackson, Naya, Hannah, Grace, Mary, Rumsey and Hallie. He was preceded in death by his grandparents Don and Dolores Sobjack and Mel Heisey, and aunt Debbie Sobjack. A celebration of Evan’s life will be held late summer or early fall of this year. In lieu of flowers, memorials may be made to Summit to Sound Search and Rescue, 1014 W. Smith Rd., Bellingham, WA, 98226. You may share memories with the family at www.westfordfuneralhome.com.

Evan Joseph Sobjack passed away after a boating accident on April 14, 2020 in Bellingham. He was born on October 4, 1991 in Khmelnytskyy, Ukraine and was adopted when he was 13 months old by his loving parents, Brad and Barbara (Heisey) Sobjack.... View Obituary & Service Information

The family of Evan Joseph Sobjack created this Life Tributes page to make it easy to share your memories.

Evan Joseph Sobjack passed away after a boating accident on April...