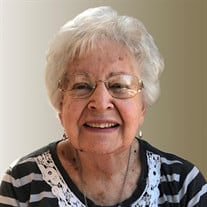 Eunice Martha (Harthun) Fischer entered into The Lord’s presence on May 16, 2022, in Bellingham, WA. Eunice was born in Lansing, IL on September 17, 1926. She was the fourth of eight siblings, one of whom did not survive birth. Her parents were the Rev. Herbert and Martha Harthun. She grew up just outside of Chicago in Lansing during the Depression and WWII. Eunice was an excellent student; a valedictorian of her high school. She attended college at Concordia Chicago and began her professional life as a parochial kindergarten teacher in Fargo, ND. During that time, she met her lifetime partner, a young pastor working in Glen Ullin, Carl Fischer. They married in 1951. Carl was eventually called to a congregation in Milwaukee, WI. There the family added a son and a daughter. In 1959 the family moved to Bellingham, WA. In Bellingham, Eunice raised her family, continued her education at WWU, and carried on in her teaching career at Custer Elementary School. Eunice was a hard worker, a good cook and sharp-witted. She loved music. She was also a dedicated mother, a firm believer in the Lord Jesus, and was committed to the work of the Church. In later years Eunice enjoyed traveling with her Carl, and the joys of active involvement in the lives of their grandchildren. They were blessed with 65 years of marriage. Carl died in 2016. Eunice is survived by her brother Luther Harthun (Annie), son Jonathan Fischer (Laurie), daughter Martha Bajema (Tom), and grandchildren Walter Bajema, Grace Schmidt (Daniel), Angela Dahl (Steven), Peter Fischer, and other beloved family members. A funeral service for Eunice will be held on Wednesday, June 8th at Trinity Lutheran Church at 11:00am. A reception will follow at the church. Many thanks to the caring people at Spring Creek Memory Care and Bellingham Hospice. Memorials may be made to Trinity Lutheran Church of Bellingham, WA. “There goes a beautiful woman.” (Carl – ca.2015)

Eunice Martha (Harthun) Fischer entered into The Lord&#8217;s presence on May 16, 2022, in Bellingham, WA. Eunice was born in Lansing, IL on September 17, 1926. She was the fourth of eight siblings, one of whom did not survive birth. Her parents... View Obituary & Service Information

The family of Eunice M. Fischer created this Life Tributes page to make it easy to share your memories.