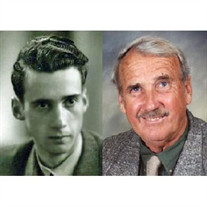 Emil deWilde, age 91, passed away on November 20, 2015 with his wife, children and grandchildren by his side. He was born August 21, 1924 in Leiden, Netherlands. Emil grew up in both the Netherlands and Indonesia. He spent World War II living a life that could have been memorialized in a movie. He served in the Dutch resistance to Nazi occupation as a part of an underground outfit that engaged in counterintelligence, communications sabotage, and housing Jews who were in danger. He saved many lives and was an unsung war hero. On June 14, 1947, he married the prettiest girl in the Netherlands, Gina “Jean” Hilbrants. Emil and Gina immigrated to the United States the following year, passing through New York Harbor before ultimately settling in the Northwest. In 1951, he founded deWilde’s Nursery, the first of his many business ventures in Whatcom County. He sold plants during the day and provided yard care on weekends and evenings. He is fondly remembered as the only nurseryman in Bellingham who made wooden shoes his footwear of choice. His commitment to tradition even extended to the operations of his business. He proudly refused to use a calculator or computer throughout his career, choosing to manage his books without the use of technology. “Your brain is a muscle, you must exercise it,” he was fond of telling people, especially his tech-savvy grandchildren. Emil served three terms as the President of the Washington State Nursery and Landscape Association and was honored by the organization with the “Industry Pioneer Award” in 2009. He expanded his business to include landscape installation and also founded deWilde’s Wholesale Nursery. It was not uncommon to see Emil planting trees on a project after closing up the retail business for the night. Emil showed up to work well into his 80’s and was a tireless worker who created tremendous opportunity for his family and many in the community. His businesses are still thriving today and operated by many of his children and grandchildren. Emil’s heart for his family and friends was only matched by his heart for his animals. In 1967, he became active in the Whatcom County Sheriff's Posse, which was his best opportunity to justify horse ownership again. Several years later, he converted a large piece of property into a polo field and founded the Bellingham Polo Club which hosted competitive players from Washington, Oregon & British Columbia. He took great pride in personally maintaining the polo grounds to a professional level and visited his horses daily until the past year. Throughout his life he was seldom seen without one of his beloved dachshunds at his side. They may have been an ill-suited breed for a horseman, but reflected the affection and loyalty of their owner. Emil will be remembered as an engaging and generous man who had high standards for all who worked with or for him. He is survived by a large family who he loved well, including his dear wife of 70 years, Gina, children Margaret Rudy (husband Larry) of Lynden, Carol Salisbury (husband Don) of Bellingham, Linda Petersen (husband Rob) of Enumclaw, WA, Ed deWilde (wife Sue) of Custer, nephews Michael deWilde, Hans Van Miert, niece Annette Van Miert Longgood, 9 grandchildren, numerous great-grandchildren, plus many loving relatives and friends. A celebration of life will be held on Friday, November 27th at 11 am at Birchwood Presbyterian Church, where Emil was an active member for over 60 years. Memorials may be made to Birchwood Presbyterian Church (400 Meadowbrook Ct, Bellingham, WA 98226) or the Alzheimer's Association of Washington State (100 W Harrison Street, N200, Seattle, WA 98119). You may share your memories with the family at http://www.westfordfuneralhome.com.

Emil deWilde, age 91, passed away on November 20, 2015 with his wife, children and grandchildren by his side. He was born August 21, 1924 in Leiden, Netherlands. Emil grew up in both the Netherlands and Indonesia. He spent World War II living... View Obituary & Service Information

The family of Emil A. deWilde created this Life Tributes page to make it easy to share your memories.