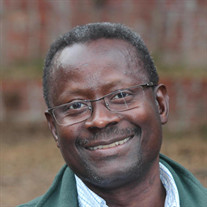 Edgard Coly passed away peacefully, surrounded by his wife and children, on March 19, 2021 from complications related to lymphoma. He was 64. Born in Soutou, a small village in the Casamance region of Senegal, Edgard was part of a large and loving family that encouraged him to pursue his education and supported him in moving to Dakar where he attended Université Cheikh Anta Diop. He was an active member of the Paroisse des Martyrs de l’Ouganda Dakar, and discovered his love for teaching when he volunteered through the church to tutor students preparing for their college entrance exams. This led to a job as a language instructor with the U.S. Peace Corps in Thiès, Senegal. It was there he met Shirley and they started a 33-year life journey together. After their wedding in Senegal, they moved to Washington, D.C. Edgard quickly acclimated to life in the U.S. and was an engaged American citizen. He loved American politics and often was a featured speaker on Voice of America, sharing his perspective on current political events. He registered voters, wrote letters to his representatives, and generously supported campaigns for his preferred candidates. Even though he acquired a new citizenship, he remained a proud and loyal Senegalese. He returned home often and stayed in close touch with his family and friends there. He shared the love of his culture through his teaching and his cooking, known especially for his delicious hot pepper sauce (kaany) and maafé. Edgard continued his studies at American University in Washington, D.C. for a master’s degree, and then University of Colorado, Boulder where he earned his doctorate. He remained a committed Buff fan, even in the off years. Edgard found deep satisfaction through his career as an Assistant Professor of French at the Middlebury Institute of International Studies at Monterey, where he taught and mentored graduate students for almost 20 years, until his recent retirement. He loved sharing the perspectives of African people on global issues and the complexity of a continent he felt was often misrepresented. His students appreciated him for his endless patience, constant encouragement, and sense of humor. Commencement was one of his favorite rituals, not only because he wore one of the best robes, but also because he took great pride in the progress of his students and was genuinely interested and excited about their futures. Outside of his career, Edgard found a loving community at San Carlos Cathedral where he joined the church choir, enthusiastically singing bass every Sunday. Music filled his soul and he spent countless hours listening to jazz and opera. He would often break out in song--sometimes silly, sometimes religious, often something from one of his favorite jazz musicians (John Coltrane and Miles Davis topped the list). He entertained (and embarrassed) his family with his spontaneous dancing. Edgard will perhaps be most remembered for his love of family. In addition to his spouse, Shirley, he leaves behind three children: Fabrice, 33; Cedric, 24, and Eloise, 21. He was supportive and loving in all of his family’s ventures, and will be remembered for his quiet wisdom and loving smile. We will celebrate his amazing life with a funeral mass on Wednesday, March 24 @ 10:00 am Pacific Time. Please join us via live stream at https://www.facebook.com/pages/category/Catholic-Church/Northwest-Corner-Catholic-Community-101836744792790/ Edgard lived with cancer for 20 years but he never let it define or limit him. Most people around him didn't know of his illness because he never complained and continued about his life with vigor and passion. Our family is deeply appreciative of Dr. John Haussdorf, who helped Edgard manage his disease and respected his wishes at every phase. For those wishing to honor Edgard’s memory in some way, consider a donation to the Monterey Jazz Festival, the Middlebury Institute of International Studies, or York School, his three favorite organizations in Monterey, California.

Edgard Coly passed away peacefully, surrounded by his wife and children, on March 19, 2021 from complications related to lymphoma. He was 64. Born in Soutou, a small village in the Casamance region of Senegal, Edgard was part of a large and... View Obituary & Service Information

The family of Edgard Coly created this Life Tributes page to make it easy to share your memories.

Edgard Coly passed away peacefully, surrounded by his wife and...