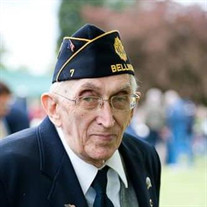 Earl M. Erickson, age 90 passed away peacefully into the arms of Jesus on Friday November 12, 2021 at his home in Blaine. Earl was born November 6, 1931, in Pelican Rapids, MN to Elmer and Minnie (Evjen) Erickson on the family farm in Lida Township. He graduated from Pelican Rapids High School in 1950 from a one room schoolhouse and was the president of the Future Farmers of America (4H). In September 1952, Earl enlisted in the United Stated Air Force. Earl was rushed through a 12-week training at Parks Air Force Base near Oakland, CA due to the Korean Conflict. Earl transferred to Nellis Air Force Base north of Las Vegas, NV where he performed maintenance work on the F86, F80, T33, F84, and F100 model Jet Fighter planes, and trained combat ready pilots on biological and chemical warfare. Earl attained Airman 1st class ranking and was honored by receiving the Airman of the Month Award (twice) for his leadership in safety and maintenance. Earl had the privilege to cross paths multiple times with Howard Hughes. After his service in the United States Air Force, he accepted a career at Boeing in Seattle, WA in a position focused on quality control. While at Boeing, he met his beautiful wife, Nancy. After traveling for their careers, they resided in Bellingham, WA to raise their 4 children. During this time Earl owned and sold 2 gas stations and opened Earl’s Auto Tech and Tire. Earl was 1 of 6 certified auto mechanics in Whatcom County. Earl and Nancy then moved to Blaine, WA to enjoy their 59 years of marriage, retirement, the ocean, and their 5 grandchildren. Earl enjoyed classic cars, sport of all kinds, writing for Northwest Retirement Magazine, Norwegian/Swedish cooking, participating in Maritime Ministries and Veterans Memorial Services. He was most famous for his Bible studies and “Dad Notes.” Earl was preceded in death by his sister Mary Lou, and his parents Elmer and Minnie Erickson. Earl is survived by his wife Nancy Erickson, 4 children Darla Erickson-Knudsen (Jerry Fennen), Sheila Erickson-Self, Glen Erickson, Erica Swanger (Mitch), and 5 grandchildren Rob Knudsen (Zahireen), Kristian Self, Karlee Self, Joey Swanger, Levi Swanger, and many loving nieces, nephews, and friends. A private graveside service was held at Bayview Cemetery. A celebration of life will be held this spring 2022 to share stories and our love for Earl. In lieu of flowers, donations can be made in his honor to Paralyzed Veterans of America, or Wounded Warriors. You may share memories with family at westfordfuneralhome.com

Earl M. Erickson, age 90 passed away peacefully into the arms of Jesus on Friday November 12, 2021 at his home in Blaine. Earl was born November 6, 1931, in Pelican Rapids, MN to Elmer and Minnie (Evjen) Erickson on the family farm in Lida Township.... View Obituary & Service Information

The family of Earl M. Erickson created this Life Tributes page to make it easy to share your memories.

Earl M. Erickson, age 90 passed away peacefully into the arms...