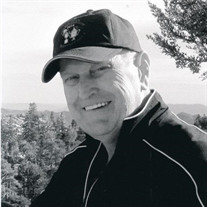 Duane Lewis Fear passed away at Swedish Hospital ICU in Seattle, Washington on Saturday, September 3, 2016, surrounded by his wife and children, after a long and valiant struggle due to complications after surgery. Duane was born October 18, 1946 in St. Louis, Missouri to Carl and Erma (Calhoon) Fear. He was the second of their three children. Duane attended a small neighborhood Presbyterian Church and was happy to say he had perfect attendance for eight years. As a boy, Duane loved baseball, and he dreamed of having a professional baseball career. He tried out for the St. Louis Cardinals, but when he didn’t make the team it did not dampen his love for the game. Duane graduated from Bayliss High School in 1964, then attended Missouri School of Mining and Engineering in Rolla, Missouri for one year. He went to work for Southwestern Bell in 1965, then he enlisted in the US Navy in 1966. In September of 1966 he married Virginia (Ginny) Crisman. The couple moved to Washington, DC where Duane served at the Naval Security Station until the end of his enlistment in 1969, when they returned to St. Louis and he returned to work at Southwestern Bell and attended community college. It was at this time they became parents to Sara Jane (Williams), and to Jason Duane. He was meticulous in his work in the central office and went on to join circuit design. He transferred to Seattle, WA in 1978 where he was promoted to supervisor for Pacific Northwest Bell. He loved his work in the telecommunications industry. At the time of his death, age 69, he was still a full-time employee of Century Link. Duane loved sports; baseball and golf in particular. He coached the women’s softball team, the Diamond Dusters, in Seattle. He played on the Seattle Parks & Rec team, the Divers, who won a championship. He took up golf in the 1980’s, and for a few years played golf and baseball with equal enthusiasm. However, it was golf that provided the metaphor for his life. It challenged him to be the best he could be. Duane strived for excellence in everything he did, and this drive for excellence extended to his relationships as a husband, father, friend and co-worker. One of the truly memorable experiences of his life was winning a contest in 1988 that enabled him to play golf with the great Jack Nicklaus. In 1993 Duane married Cheryl (Taylor) Fear. The couple lived in Mount Vernon while Duane continued to work in Seattle. At the end of 2004 he was diagnosed with B-cell non-Hodgkins lymphoma. Duane’s strength of character, body, and spirit rose to the occasion, and he came through the chemo and radiation treatments like a champ. He completed his cancer treatments at the same time his wife completed seminary. He was ardent in his support of his wife’s call to ordained ministry as an Elder in the United Methodist Church, even though it meant moving to Spokane, Cashmere, and back to Bellingham as she itinerated. He loved to sing, and joined the Apollo Men’s Choir in Wenatchee, and the choir at Garden Street UMC. Duane was proud grandfather to Lindsay and Carly Williams, and Owen Williams, Jeffrey Duane Fear, Melissa, Megan, and Ty Harris, and was looking forward to the arrival of Daniel Kyle Campbell Jr., his first great grandchild. Duane was preceded in death by his parents, Carl & Erma Fear; brother, Robert Fear; brother-in-law, Tom Wagner. He is survived by his wife, Cheryl; daughter, Sara Williams (Mark); son, Jason Duane Fear (Jen); Cheryl’s children, Marnie Harris (Ron) and Terry Lee Taylor; sister, Diane Wagner and sister-in-law, Linda Fear, and numerous nieces and nephews. Duane loved life and made life for everyone around him better. His son-in-law, Ron, said, “I am a better man because I know Duane.” To which his daughter, Sara, added, “We’re all better because we know Duane.” His granddaughter Lindsay said, “Grandpa is legendary.” He was the epitome of a gentle-man. A memorial service will be held Saturday, September 10th at 2:00 PM in Mount Vernon, WA at the First United Methodist Church located at 1607 E. Division. The family requests memorial gifts be made in Duane Fear’s name to Swedish Foundation, Digestive Health Network, 747 Broadway, P.O. Box 3976, Seattle, WA 98124-3976. You may share memories with the family at www.westfordfuneralhome.com.

Duane Lewis Fear passed away at Swedish Hospital ICU in Seattle, Washington on Saturday, September 3, 2016, surrounded by his wife and children, after a long and valiant struggle due to complications after surgery. Duane was born October 18,... View Obituary & Service Information

The family of Duane Lewis Fear created this Life Tributes page to make it easy to share your memories.