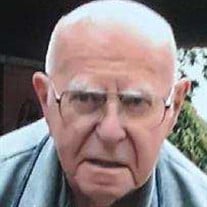 Douglas Gardner Farrar passed away on May 8, 2020, following a heart attack on May 6, 2020. He was 90 years old. Doug was born on March 6, 1930, in Vernon, British Columbia. He was the youngest of four children, William (Bill), Jack and Berna, all who have preceded him in death. He moved to Bellingham as a young child and lived there the rest of his life. He married the love of his life, Margaret, on August 13, 1949. They were married for 65 years and had five children. He became her caregiver for the last two years of her life, learning to do things around the house he had never done before, all without complaint and full of love. He is survived by two of his three sons, Steve and Jim Farrar, and his daughters, Kathy Otten and Debbie Knutson and her husband, Gene Knutson. His son Jerry preceded him in death. His 10 grandchildren include Steve’s daughters, Shelby and Alex Farrar, Jim’s sons, Kody and Ryker (Marian) Farrar, Jerry’s son, Kyle (Anneliese) and daughter, Mandy (James), Kathy’s daughters Elizabeth and Rebecca Otten and Debbie and Gene’s children, Matthew and Anna Knutson. He had four great grandchildren, and a new one on the way. He had a wonderful sense of humor, something he passed on to all of his children. He was a hard worker, working in the furniture and floor covering business for most of his life. From Levins, to Luke & Crews, to Carpet City to Lynden Paint & Decorating, he provided great service to his customers for many years. He was one of the most avid sports fans on the face of the planet, both as a participant and a TV viewer, especially when it came to the Seahawks, Mariners and Huskies. (The only sport he didn’t like was soccer.) He played both fastpitch and slowpitch on many different baseball teams. He also loved to play golf and enjoyed playing with his family members, often traveling to Arizona with Steve or Jerry, as well as playing regularly with a special group of buddies for many years. Hawaii was one of his favorite places and he was able to make several trips there with Margaret. Doug was a faithful and long-time member of First Christian Church, where he was an active and respected member of the congregation. Through his work, his sports and his church, he touched many people's lives. He was a loving husband, father and grandpa and a devoted friend. He cherished spending time with his family and came to realize later in life that he wished he had spent more time with those he loved. He also began to encourage people to not wait to do the things they were hoping to do “someday,” but to do them now, while they could still enjoy them. If desired, donations to anything sports related would be a great way to honor him. He will be greatly missed. It is hoped there will be a memorial service at a later date.

Douglas Gardner Farrar passed away on May 8, 2020, following a heart attack on May 6, 2020. He was 90 years old. Doug was born on March 6, 1930, in Vernon, British Columbia. He was the youngest of four children, William (Bill), Jack and Berna,... View Obituary & Service Information

The family of Douglas Gardner Farrar created this Life Tributes page to make it easy to share your memories.