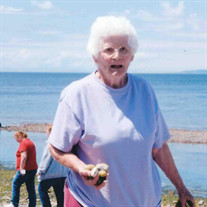 Dorothy “Nina” Silva was born in Worcester, MA, on January 13, 1934 to Edward and Mildred Whitney. She grew up in Oxford, MA, and then attended Clark University where she earned her Master’s degree in Education. She taught school for three years in Oxford then in Newfoundland for the U.S. Air Force. She went on to teach in Morocco where she received her pilot’s license and then transferred to teach in Germany. Nina returned home where she married her high school sweetheart, Daniel Silva. They were blessed with four children. After moving across country to Bellingham, WA in 1967 she and Daniel started a commercial fishing business where they participated in Dungeness crab fishing, gillnetting and longlining on their F/V Pegasus. Nina was a happy, loving person who enjoyed hosting many lively family functions with great humor, puttering in her beautiful flower gardens, and in later years walking their small dog Skipper at the harbor. Nina was a beautiful beacon of goodness and light who will shine down on us from Heaven, always in our hearts. She is greatly loved and missed. Nina was preceded in death by her parents and her pestering brother Bob. She is survived by her husband Daniel Silva, four children, Cindy Silva, Mark (Jana) Silva, Sandy Fisk and Jody (Dave) Spore, five grandchildren, Ashley, Cassie, Paige, Lacie and Allie, one great-grandson Thoren, sister Mary Donahue, niece Kathy, great-niece Kristine and great-nephew David. The family will gather privately later to spread her ashes over the reef where she had so many memories of crabbing with her husband. Memorials may be made to the American Cancer Society. You may share memories with the family at www.westfordfuneralhome.com.

Dorothy &#8220;Nina&#8221; Silva was born in Worcester, MA, on January 13, 1934 to Edward and Mildred Whitney. She grew up in Oxford, MA, and then attended Clark University where she earned her Master&#8217;s degree in Education. She taught... View Obituary & Service Information

The family of Dorothy “Nina” Silva created this Life Tributes page to make it easy to share your memories.