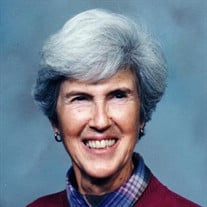 Dorothy Masson, age 89, passed away peacefully on Monday, July 6, 2015, in Bellingham, WA. She was born March 18, 1926, in Vancouver, B.C., to James and Mary Martin. Dorothy obtained her RN at Vancouver General Hospital School of Nursing and later attended Moody Bible Institute where she met her future husband, Ray Masson. They were married in Vancouver, B.C., at First Baptist Church, on September 8, 1950. Dorothy and Ray dedicated themselves to medical and missionary work with Nyuhu-speaking people in the back-country of the state of Hidalgo, Mexico. Ray passed away suddenly, in 1987, in Mexico. Dorothy continued to live and work in Mexico for 6 more years before moving to Bellingham, WA, to be near family. For the last 25 years Dorothy was a member of First Presbyterian Church where she served as an Elder and active church member. Dorothy understood Jesus' calling in very personal and practical terms that she expressed in loving every-day service to others. She helped bind many kinds of wounds in Mexico, the U.S., and Canada. Early mornings found her sipping coffee, reading Scripture and praying through the many issues facing herself and those around her. For Dorothy, no issue was too small or too large to bring to her Lord and she was quick to see her Lord's response and intervention. Miracles were an every day event, for Dorothy, even in a world that had more than enough pain and that demanded so much hard work. Dorothy believed that God is love and that His greatest command is to love. She did most of her Christian service in an interdenominational mission. She was a Canadian who married a U.S. citizen and bore her children and raised them in Mexico. She grew up with indoor plumbing, electricity, and automobiles and chose to live much of her life without any of them. She loved the mountains and the sea of British Columbia and she loved the mountains and the jungle rivers of Hidalgo. She grew up speaking English and mastered both Spanish and Nyuhu (also known as Otomi). She provided the sole medical help within a 10-20 hour hike or horse-back ride and could see 80 or 90 patients in a day and still cook lunch and dinner and read bed-time stories at night. Her home-baked bread and "sticky-buns" were as good as her sopa de arroz and her pipian. She loved a good book, a good game of Scrabble, a cup of tea, a chat with a friend, piano by Chopin or Rachmaninoff. She loved enchiladas Suizas, hand-patted tortillas fresh off the comal, cafe con panela, hand-embroidered Nyuhu blouses. She was preceded in death by her husband Ray and her brother James. She is survived by her sons Jim (wife Marsha) Masson of Olympia, WA, and Bill Masson of Bellingham, WA, granddaughter Elyse Masson of Seattle, WA, and Marsha’s sister Mary Lynn and her husband Bill Palmer, and her very many loving relatives, friends, and brothers and sisters in Christ in Mexico, Canada, the U.S., Germany, the United Kingdom, and other places. The family gives their heart-felt thanks to the very caring and sensitive caregivers at Whatcom Hospice House. Memorials may be made to Hope Unlimited for Children at www.hopeunlimited.org or Whatcom Hospice House www.whatcomhospice.org. A celebration of Dorothy’s life will be held at First Presbyterian Church, 1031 N. Garden St. in Bellingham at 2 PM on Saturday, August 22nd. A reception will follow at the church. Rev. Doug Bunnell will be officiating.

Dorothy Masson, age 89, passed away peacefully on Monday, July 6, 2015, in Bellingham, WA. She was born March 18, 1926, in Vancouver, B.C., to James and Mary Martin. Dorothy obtained her RN at Vancouver General Hospital School of Nursing and... View Obituary & Service Information

The family of Dorothy Mary Masson created this Life Tributes page to make it easy to share your memories.