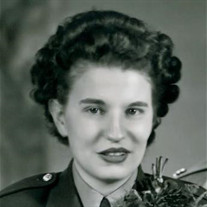 Dorothy C. “Dottie” Heller, age 94 of Bellingham, WA passed away on April 23, 2016. She was born in New York, NY on July 14, 1921 to Dominic and Wilhelmina (Balas) Holcek. She attended Julia Richmond High School in Manhattan, NY and Metropolitan Hospital School of Nursing in New York, NY graduating in 1941. Her first job was at Metropolitan Hospital in the Premature Nursery. She joined the U.S. Army as 2nd LT and shipped out to England in 1942. She married Jack Heller in Karlsruhe, Germany on October 16, 1945. After the war she and Jack returned to Whatcom County to raise their family. She worked as a Registered Nurse in Bellingham. Dorothy and Jack were long-time members of St. Peter’s Church in Deming and Church of the Assumption in Bellingham. She enjoyed knitting, and was an avid Mariners and Seahawks fan. Dorothy was preceded in death by her husband, Jack H. Heller, son, John M. Heller and five sisters and two brothers. She is survived by her children, Cathe (Bill) Quapp of Heber City, UT, Dorothy McCleery of Lynden, WA, Loris (Paula) Heller of Richland, WA, Teresa (Karl) Swope of Port Orchard, WA, Jerry (Regina) Heller of Lynden, WA and Paul (Tiffany) Heller of Houston, TX. She is also survived by 20 grandchildren, 14 great-grandchildren and many loving relatives and friends. A Vigil Service will be held at Westford Funeral Home at 7 pm on Thursday, June 16th. Mass of Christian Burial will be held at Church of the Assumption at 10:30 am on Friday, June 17th. Reception following. Committal will follow at St. Peter’s Catholic Cemetery. Memorials may be made to Hope House. Please wear bright colors to the service to celebrate Dottie's life, per her request. Mom, we miss you dearly but you are where you want to be, with Dad, and we look forward to seeing you again.

The family of Dorothy C. Heller created this Life Tributes page to make it easy to share your memories.