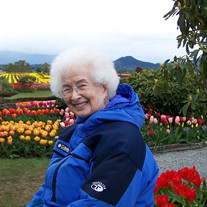 Dorothy Jean (Maynard) Banister passed away peacefully Tuesday, July 3, 2018 at the age of 92. She was born to Theodore F. Maynard and Irene F. (Lincoln) Maynard September 24, 1925 in Seattle. Her earliest years were spent on Laurel Road with her parents, two older brothers Donald and Kenneth, and a younger sister Betty (Harrington) and two half-siblings Bernice (Skinner) and Clyde. All predeceased her. After graduating from Lynden High School, she worked as a telephone operator in Bellingham. There she met and married Frank L. Wallace. Their two children survive her: Lincoln S. Wallace of California, and Jo Wallace Guthrie (and partner Glenn J. Luke) of Bellingham. Grandchildren Daniel and Elisabeth Wallace both of California also survive her, as well as many cousins, nieces and nephews in the Lincoln, Maynard, and Wallace families. Later she attended Bellingham Business College and upon graduating, began working at a local title company researching property titles. After leaving the area, she was part owner of a café in the Midwest and clerked in the office of a hardware store in New Mexico. While in New Mexico she married Ersie L. Banister, and became office manager for a cattle ranch, tack and saddle shop. She is survived by numerous Banister family in that area. Upon his death in 1998 she returned home to Bellingham. Dot was a voracious reader, consuming history and natural science as quickly as a good sci-fi or mystery. She loved to spend time volunteering with the Friends of the Bellingham Public Library, processing the non-fiction donations for the book sales. She also supported the Whatcom Literacy Council, and many other charitable organizations. The annual Wild Women outings with sister Betty, niece Diane, and daughter Jo for Tulip Tour, local garden tours, and the fair were the source of a much laughter and singing silly songs while admiring the local scenery. She also loved live music including the symphony, and live theater whenever there was a play with a happy theme. Wheel of Fortune and Jeopardy were an important part of her daily routine until the end. Being a contestant in the Seattle qualifying rounds for Wheel was a cherished memory. Crossword and Word Search puzzles also kept her mind sharp. At home her constant companion was Xena, her shared cat who was there with her until the end. (thank you Parker family!) Her family thanks her wonderful neighbors, steadfast and dear friend Nita Serang, Whatcom Hospice, Right at Home caregivers, her team at Center for Senior Health (especially Erin), and supportive family and friends. At her request there will be no services. Cremation arrangements are under direction of Westford Funeral Home.

Dorothy Jean (Maynard) Banister passed away peacefully Tuesday, July 3, 2018 at the age of 92. She was born to Theodore F. Maynard and Irene F. (Lincoln) Maynard September 24, 1925 in Seattle. Her earliest years were spent on Laurel Road with... View Obituary & Service Information

The family of Dorothy Banister created this Life Tributes page to make it easy to share your memories.