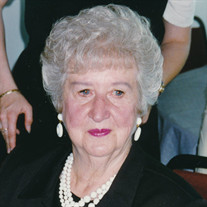 Dorothea Crawford Hamilton, age 91, passed away peacefully on September 19, 2014 in Bellingham. She was born on December 25, 1922 in Yakima, WA. After living briefly in Portland and Everson, the family moved to Bellingham. Dorothy graduated from Bellingham High School in 1940. After high school she worked at the Union Hall, Reid Boilerworks as a bookkeeper, and at several dress shops in Bellingham. She met Ray Crawford at the Grand Theater during World War II while he was on shore patrol in the Coast Guard. They were married on September 7, 1945 in Bellingham. When Dorothy was young she would roller skate and go to dances with her sisters. Dorothy liked to vacation at Sol Duc Hot Springs, and for many years in a row spent the week of the 4th of July at Birch Bay with her sisters Mable and Helen, her sons, her grandchildren, and many nieces and nephews. Her favorite holiday was Christmas, her birthday. For a time, Dorothy was an avid Seattle Mariners fan, watching almost every game for many years. She was a meticulous dresser, very aware of coordinating the colors of her clothing to match. Dorothy loved animals and small children, and couldn't stand to see them treated cruelly. She had several poodles. Dorothy was an experienced seamstress who specialized in quilts, and sewed satin pillow cases for her grandchildren. When her sons were young she was a Cub Scout den mother and on the board of the PTA. Dorothy is survived by her sons Neil Crawford (Cathy), and Steve Crawford (Barb); grandchildren Brock Crawford (Erica), Carley Wilson (Ryan), Lisa Gayle (Clint), Katie Vellegas (Joe), and great grandchildren Anna Wilson, Cole Wilson, Chase Crawford, Hope Gayle, Jack Gayle, Josiah Vellegas, and Owen Vellegas; sister Mable Parmelee, and numerous nieces and nephews. She was preceded in death by her first husband Ray Crawford, her second husband Glen Hamilton; sisters Helen Anderson, Violet Johnson, Margaret Tarr, and brother Gus Gebauer. Dorothy had dear friends John Nichols and Franz Gabl at Alderwood Convalescent Center. She had the best roommate in that nursing home, Shirley Kirkbride who looked out for her and treated her like a sister. Dorothy's family would like to thank the staff at Alderwood for the loving care they gave her. Memorials in her name could be made to the Lighthouse Mission in Bellingham. A Memorial Service will be held at Westford Funeral Home at 11 AM on Saturday, September 27th. A reception will follow.

Dorothea Crawford Hamilton, age 91, passed away peacefully on September 19, 2014 in Bellingham. She was born on December 25, 1922 in Yakima, WA. After living briefly in Portland and Everson, the family moved to Bellingham. Dorothy graduated... View Obituary & Service Information

The family of Dorothea Crawford Hamilton created this Life Tributes page to make it easy to share your memories.