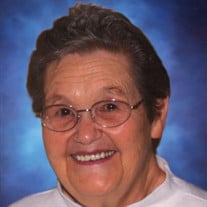 Doris May (Ayars) Foster, 95, passed away in Lynden, WA on Friday, October 27, 2017. Doris arrived May 13, 1922 in La Grande, OR, the second of four children born to W. Oscar Ayars and Maude A. (Banton) Ayars. Maude passed away when Doris was just six years old. Doris attended Greenwood School, then went to Central and La Grande High School through her junior year. In 1937, her family moved to Ukiah, OR, where Doris graduated from high school in 1939. In 1940, she graduated from Draper’s School of Commerce. She married Ken Foster on November 22, 1940, and they started their life together in The Dalles, OR. Ken was a carpenter by trade. During the 1940s, he built many houses all over The Dalles and surrounding vicinity, and he and Doris also built four children: Kenny, Kerry, Kathy, and Karolyn. In 1952, they bought a large ranch at North Bonneville, WA and started Foster’s Evergreen Dairy, where they sold bottled milk for 13 years. During that time, Ken and Doris lost their son, Kerry, in 1963, who drowned while serving as a Marine. In 1965, they sold the ranch and moved to Odell, OR, where Ken ran a mobile home business until he retired. The Fosters moved to Battle Ground, WA in 1978, and then to Vancouver, WA in 1983. They became lonesome for The Dalles, so they returned to their roots in 1991 and built themselves a house just blocks from their very first home. After nearly 62 years of marriage, Ken passed away in 2002 at the age of 88. Doris moved to Bellingham, WA in 2004, where she remained under the loving care of her children until she passed away. She is survived by her son, Ken L. Foster, of Vancouver, Washington; her daughter, Karolyn Baker, of Lynden, Washington; her ten grandchildren: Kelly Foster, David Foster, Kyle Bondo, Kasey McGrady, Aaron Baker, Andrea Schaff, Tony Baker, Becky Frame, Ben Baker, and Seth Baker; and twenty great-grandchildren: Gabriel, Zachary, Kayla, Emmett, Ethan, Liam, Laurel, Stuart, Steven, Madeline, Sara, Lyla, Olivia, Elias, Zeruiah, James, Jonathan, Edward, Alistair, and Oscar. She is preceded in death by her husband, Kenneth George Foster; her son, Kerry Dean Foster; and her daughter, Kathryn Gail Costello. A graveside service will be held at 1:30pm on Thursday, November 2, at The Dalles IOOF Cemetery, 110 W. 18th St. Doris wished for memorials to be given to local charities who help to care for those in need. You may share memories with the family at www.westfordfuneralhome.com.

Doris May (Ayars) Foster, 95, passed away in Lynden, WA on Friday, October 27, 2017. Doris arrived May 13, 1922 in La Grande, OR, the second of four children born to W. Oscar Ayars and Maude A. (Banton) Ayars. Maude passed away when Doris was... View Obituary & Service Information

The family of Doris May (Ayars) Foster created this Life Tributes page to make it easy to share your memories.