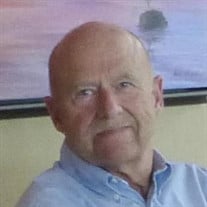 Donald Charles Whitney passed away at Hospice House in the early morning hours of December 2, 2021 after a courageous 20-year battle with multiple myeloma. He was born in Bellingham on September 15, 1942 to Donald Claire and Helen Charlotte Whitney, graduated from Bellingham High School in 1960 and earned a BA in Business Administration from Western Washington University. He was also a veteran, having served in the Marine Corps Reserve. Don worked at several jobs during his early years, including logging, the frozen fish industry, a stint with the Boeing Company, and a position as an insurance adjuster. His ultimate profession became real estate sales and appraisals. Clients and co-workers alike respected him for being meticulous, hard-working, and extremely ethical in his field. In the 1970’s he established a real estate company of his own called “Harbor West,” but after a short time he realized that he would rather work side-by-side with his colleagues than be their “boss,” so he let go of the business and became one of the “worker bees” for several local real estate firms. Don was fiercely devoted to the Bellingham High School Class of 1960, attending monthly lunches with “the guys”, annual class picnics with everyone, and fall barbeques in Mt. Vernon to kick off the Husky football season. Don’s personal passions could be found in sports and in the great outdoors. Every summer he enjoyed camping and fishing at Pearrygin Lake with many of his BHS buddies, and in the fall he hunted ducks in Whatcom County and deer in Twisp. The winter months would find him skiing in Sun Valley, Idaho or on Mt. Baker, where he was an active member of the Mt. Baker Ski Patrol. (Shenanigans reigned supreme at the Chandelier Lodge during ski season!) He also enjoyed hiking, and would often talk about having climbed the “Twin Sisters.” He would also share memories of seeing the wonder and beauty of the blazing fall foliage while hiking the hills outside of Leavenworth. The 1990’s found Don playing handball on the courts in the basement at Munchie’s on Samish Way and bringing food to share at their weekly smorgasbords. Around that time, he “fell in” with a group of airline pilots who had a week-long party every summer at Incline Village on Lake Tahoe that they called “Holy Moly.” Great fun! Don also owned a sailboat and enjoyed sailing the San Juan Islands and “buzzing” Teddy Bear Cove with it. Some summers, he would assemble crews to participate in the sailboat races on Bellingham Bay. “Uncle Duck,” as he was affectionately called, would always cherish the family holiday gatherings and he very much enjoyed playing a part in the three generations of nieces and nephews who loved him so much. Although never marrying, Don had a wide circle of friends, many of whom were with him until the end (and now beyond), including Bob Chandler, Rhonda Tull, Carman Bunker, Barb Keyes, Terry Norr, and his neighbor, good friend, and breakfast buddy, Mark Schlichting. His classmate, Janene Aker, also played a special role in Don’s life, having been in every one of his classes at Washington Elementary School, 1st through 6th grades, and looking after him during his stem cell transplants at Seattle Cancer Care Alliance along with Don Olson, another classmate and close friend.. Don was predeceased by his parents, and his niece Andrea Benedict and nephew Matthew Benedict. He is survived by his sisters Martha Benedict and Evelyn Whitney (Hans Kraan), nieces Allison Hagin, Shannon Montoure, and Brenda Whitney (Ray Pierce), as well as grandnieces and grandnephews Elisabeth Stevens (Tyler), Annalise Mortimer, Natalie Mortimer Montoure, Maxwell Mortimer Montoure (Anna Zocher), Benjamin Whitney (Anne), Taylor Hagin (Haset), Laurel Hagin, Erika Collins (Clay), Charlotte Hasbrouck, Milan Hasbrouck, Amie Stier (Kelly), Eric Young (Nikki Henry), and Andrew Young. Don is also survived by nine great-grandnieces and nephews: Julia and James Stevens, Palmer and Winston Collins, Beckett and Benson Stier, and Micah, Judah, and Jameson Young. The family wishes to thank SCCA, the Peace Health Cancer Center, Whatcom Hospice, and all the friends and family who helped care for Don during his illness. SERVICE DATE AND LOCATION UPDATE- A memorial service will be held at Westford Funeral Home, 1301 Broadway St., on Monday, January 24, at 1:00 pm with a reception following at Westford’s Broadway Hall, 1300 Broadway St. Masks are required. View Don’s complete obituary and share memories with the family at www.westfordfuneralhome.com.

Donald Charles Whitney passed away at Hospice House in the early morning hours of December 2, 2021 after a courageous 20-year battle with multiple myeloma. He was born in Bellingham on September 15, 1942 to Donald Claire and Helen Charlotte... View Obituary & Service Information

The family of Donald Charles Whitney created this Life Tributes page to make it easy to share your memories.

Donald Charles Whitney passed away at Hospice House in the early...