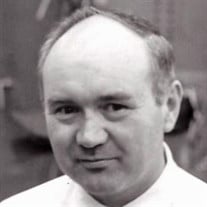 Donald G. Holt was born in Lynden, WA, the third of seven children of Leora Holt. He was preceded in death by his mother, his brother John and his sister Kathleen. He is survived by his wife Louise, son Don Jr. (Linda), brother Gordon, sisters Margaret, Patricia and Shirley, and many nieces and nephews. Donald inherited the faith of his mother; he grew to be a strong Christian man. Donald was raised in various places in Washington as his family dealt with the Great Depression - Lynden, Bellingham and Pateros among them. After High School, Donald found work at the Boeing Company. At the onset of WWII, he enlisted in the Army, finding his way to the Air Corps, flying P-47 fighters over Europe in the wake of the D-Day invasion. He was a member of the “Hun Hunters” 366th Fighter Group, 391st Squadron. After the war, Donald earned his BS Degree in Aeronautical Engineering from the University of Washington. He went to work for the Boeing Company in 1950 as a Customer Support Engineer for military airplanes. Shortly thereafter he met Louise and they were married in 1951. Donald’s son, Don Jr., was born in 1957 and Donald transitioned to supporting commercial airplanes. His assignments included Spokane, WA, Renton, WA, Mexico City, Minneapolis, MN, finally settling back into the Pacific NW in 1974 at Boeing in Everett, WA. Donald was a Lead Engineer in the Powerplant group and worked mostly with Boeing 747 customers. Donald retired from Boeing in 1989, just about the time they threatened to put a computer on his desk. Donald’s retirement was spent mostly near Anacortes, WA. Don and Louise had a home just north of Deception Pass and they enjoyed trolling for salmon, gardening, hiking, traveling and pretty much being active. In the summer of 2015, Donald’s health diminished, so he and Louise moved to Mukilteo to be closer to family. Donald was a man of integrity. He was never caught in a lie and he always made sure he upheld his responsibilities toward his family. He provided well for his wife and son and made life interesting because of his many abilities. Dad wasn’t one to verbalize his love; he showed it in action. Time spent, instruction given and shared activity all added up to a Husband and Father worthy of respect. Thank you Dad, for a life well lived. You will be missed… A Service of Remembrance with military honors will be held at Westford Funeral Home on Friday, October 23rd at 1 PM. Reception following.

Donald G. Holt was born in Lynden, WA, the third of seven children of Leora Holt. He was preceded in death by his mother, his brother John and his sister Kathleen. He is survived by his wife Louise, son Don Jr. (Linda), brother Gordon, sisters... View Obituary & Service Information

The family of Donald G. Holt created this Life Tributes page to make it easy to share your memories.

Donald G. Holt was born in Lynden, WA, the third of seven children...