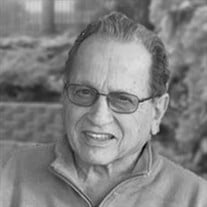 Longtime educator Dominic Paul Garguile, 83, died August 31, 2020 at Whatcom Hospice House after a six-year battle with Parkinson’s and vascular diseases. He was born February 15, 1937, in Philadelphia, PA to Dominic and Lucy Garguile. His father died young, and Dominic subsequently attended Girard College, a boarding school for boys whose fathers were deceased. He made lifelong friendships during his 10 years at Girard. After graduating from Girard and a brief stint in the U.S. Merchant Marine, Dominic lived in Bremerton with his older brother Nick and family. He attended Olympic Junior College before moving to Bellingham to attend what was then called Western Washington State College. After earning a bachelor’s degree in education, he and his first wife Jane, taught school in San Jose, CA from 1961 to 1964. During that time, he was a goaltender for an international soccer club. They then moved to Tripoli, Libya, to teach at the The Oil Companies School for two years before returning to Bellingham where their children were born – Joe in 1966 and Angie in 1968. Dominic was married to Carol Curran in April of 1987 at First Congregational Church in Bellingham. Dominic taught for 38 years, almost all of them as an eighth-grade core teacher at Fairhaven Middle School where he taught everything from economics and math to PE and drama. He earned an excellence award from Economics America while teaching at Fairhaven Middle School and was fortunate to teach the children of some of his students. Although some students may not have enjoyed or appreciated the grammar lessons he taught, many reflected later in life on the positive impact of those intense lessons. Dominic inspired many of his students to become teachers and coaches. In fact, a former student once called from medical school seeking advice on a paper he was writing. Having been an accomplished wrestler, soccer and rugby player in his youth, Dominic coached soccer and wrestling during his years as a teacher and frequently drove students to Canada so they could play organized youth sports, which helped to accelerate youth soccer within Bellingham. He was the WWU Women’s soccer coach from 1981 through 1990, where his teams’ record of 38 consecutive wins has been tied but not broken. He was inducted into the WWU Hall of Fame in 1996 and recognized by the Skagit Referees Association for his involvement with wrestling. He officiated for wrestling, soccer, and football for many years in Whatcom and Skagit counties. He enjoyed theater and was in several productions for the Bellingham Theatre Guild. An avid singer, he was a member of the Kulshan Chorus, Toppers, and First Congregational Church Choir. He also loved to fish, golf and work outside. He was preceded in death by his parents; his brother Nick; and stepson Todd Curran. He is survived by his wife of 33 years, Carol; children Joseph Gargiulo and Angela Adams (Steve Espy); stepchildren Cheryl Curran, Brent (Leslie) Curran; and grandchildren Mitchell Adams, Kate Gargiulo, Shannon Curran, Vinson Curran, Lily Curran and numerous nieces and nephews. Memorial contributions may be made to Whatcom Hospice, First Congregational Church of Bellingham, or the Soccer Endowment at WWU. Due to the many people who know and love Dominic, a celebration of life will be held in 2021 to honor this wonderful man. You may share your memories of Dominic at www.westfordfuneralhome.com

The family of Dominic Paul Garguile created this Life Tributes page to make it easy to share your memories.