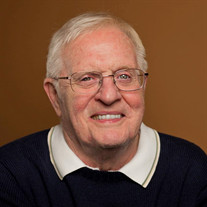 Patrick Desmond McArdle passed away on December 12, 2015 in Bellingham at age 76. Des lived in Bellingham with his wife Joyce for nearly 50 wonderful years, where they raised their three daughters: Pauline, Patricia and Joyce. He was born to Patrick and Bridget (McCann) McArdle on July 16, 1939 in Rathfriland, County Down, Northern Ireland. Des spent his happy early years growing up in Rathfriland. He graduated from Saint Colman's College in Newry, County Armagh, Northern Ireland, the Dromore Diocesan Seminary. Saint Colman's is renowned in Ireland for academics and Gaelic football (soccer). During his time there, Des was an outstanding student and a nationally ranked Gaelic football player. He was also an extraordinary hurling and rugby player. He graduated from Saint Colman’s with honors. He then went to Saint Patrick's College, Maynooth, County Kildare, Ireland, the National Seminary for Ireland and a Pontifical University, where he continued to excel in academics, graduating with honors and was again nationally ranked in Gaelic football. After immigrating to the United States, Des attended Seattle University, graduating with honors and obtaining another Master’s degree in Education. Des began his career at Bellingham Technical College as a counselor, when the school was known as Bellingham Vocational Technical Institute. He became Program Developer, Assistant Director and then the school’s Director. When BVTI joined the Washington Association of Community and Technical Colleges and became Bellingham Technical College, he became its Founding President. Upon retirement he was honored with the distinction of President Emeritus. He loved his work, the students, staff and faculty at BTC. Five years after his retirement, he returned as Interim President. Des was deeply touched when in 2004 the Desmond McArdle Center at BTC was dedicated to him and his 30 years of service, including 20 years as leader of the college. He is survived by his wife Joyce McArdle of Bellingham, his three daughters and their husbands: Pauline McArdle Black and David Black of Bellingham, Patricia McGuane Richling and Joe Richling of Renton, Joyce McGuane Weinand and Mike Weinand of Olympia. He is also survived by his siblings, their spouses and families in Ireland and Northern Ireland including: Pauline and John McNeill of Banbridge, County Down; Arthur and Catherine McArdle of Tallaght, South Dublin; Vera and Frankie Donnelly of Belfast; Cis Monaghan of Rathfriland. He was preceded in death by his parents and his brother Gabriel McArdle. The priorities in Des McArdle’s life were his wife and daughters, his family in Ireland and Northern Ireland, his Catholic faith and helping to offer a better life to so many through vocational education at Bellingham Technical College. He was very proud of the opportunities BTC offered to students. He also took great joy in hosting family barbecues and being a part of his beloved Bellingham community. Father K. Scott Connolly will celebrate a Mass of Christian Burial at Church of the Assumption, 2116 Cornwall Ave. in Bellingham on Saturday, December 19th at 10:30am. A reception will immediately follow in the Assumption gym. All are welcome to the Mass and the reception. In lieu of flowers, you may donate to the McArdle Endowment for Student Success, Bellingham Technical College, BTC Foundation, 3028 Lindbergh Ave, Bellingham WA 98225 or Whatcom Hospice Foundation, 2901 Squalicum Pkwy, Bellingham, WA 98225. Y

Patrick Desmond McArdle passed away on December 12, 2015 in Bellingham at age 76. Des lived in Bellingham with his wife Joyce for nearly 50 wonderful years, where they raised their three daughters: Pauline, Patricia and Joyce. He was born to... View Obituary & Service Information

The family of Des McArdle created this Life Tributes page to make it easy to share your memories.

Patrick Desmond McArdle passed away on December 12, 2015 in Bellingham...