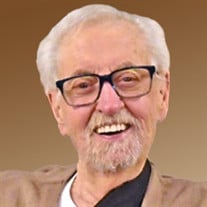 Dennis C. Susdorf was born to Ralph and Vera (Anderson) Susdorf in Bellingham on April 29, 1929. He attended Bellingham High School, graduated from Lincoln High School in Seattle, and returned to Bellingham where he worked for his uncles at their grocery store in Fairhaven. Dennis served in the U.S. Navy Reserves. He married Thelma Ray and they later lived in Seattle while he worked for Boeing. They had three children, Debra Lynn, Steven, and David (deceased), five grandchildren, Samantha, Sonya, Stacy, Katrina (Tony) and Christi, and five great-grandchildren. Dennis and Thelma divorced in the early 1970’s. On August 16, 1975 he married Sharon Knapstad and he gained five step-children, Don (Ardis), Terri, Gary, Dave (Sherry), and Douglas, 14 step-grandchildren, Ryan, Michael, Paul, Alicia, Dee, Krystal, Tiffany, Angela, Natasha, Shantelle, Kara, Brittany, Kyle and Isaac, 19 step great-grandchildren. He is also survived by his half-brother, Doug (Phyllis) Munson. Dennis and Sharon both worked for Boeing. Dennis received his 38 year service pin from Boeing, where he worked as a lead plater. He retired in 1990. Dennis was on a bowling league in Mountlake Terrace and thoroughly loved the game. Dennis and Sharon moved to Bellingham in 1999. They both loved doing ceramics and made many vases large and small, and many figurines. Dennis had a kiln in his third garage and was delighted when his work was admired. He was a member of Christ the King in Bellingham, the Elks Lodge and was a member of the American Legion Post #7. Dennis lived the past four months at Christian Health Care Center in Lynden. He had Alzheimer’s disease and congestive heart failure. On March 25, 2018 Dennis went to be with his Lord and Savior, Jesus Christ. Visitation will be held at Westford Funeral Home on Thursday, April 5th from 2-4 PM. A Service of Remembrance will be held at Westford Funeral Home, 1301 Broadway St. in Bellingham on Friday, April 6th at 11 AM. Reception following. Memorials may be made to CTK Bellingham or your favorite charity. You may share memories with the family at www.westfordfuneralhome.com.

Dennis C. Susdorf was born to Ralph and Vera (Anderson) Susdorf in Bellingham on April 29, 1929. He attended Bellingham High School, graduated from Lincoln High School in Seattle, and returned to Bellingham where he worked for his uncles at... View Obituary & Service Information

The family of Dennis C. Susdorf created this Life Tributes page to make it easy to share your memories.