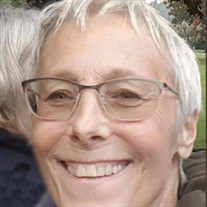 Debby Sobjack passed away on February 12, 2020 in Bellingham. Debby was born on August 25, 1951 in Bellingham to Paul and Francis (Payne) Simonds. She had a long and rewarding career with the Bellingham School District where she was admired and respected by her peers and students alike. Debby touched many lives as the registrar at Bellingham High School which allowed her the opportunity to help students who needed that extra boost. She had that ability to recognize potential in someone when they could not. Debby was a big spirit bundled into a tiny package with a zest for life. She was always open to new adventures with her husband Richard, their extensive family and the many friends who were so special to her. Debby and Richard spent many years building their beautiful cabin in Winthrop WA. The cabin, named Polish Meadows became a haven for family and friends and was truly a second home for Debby and Richard. While Debby will be missed by so many, her legacy of love and laughter lives on in all of us. Debby is preceded in death by her parents, step-son Jeff Tolliver, brother-in-law Pete Hay and great-granddaughter Miranda Vevag. She is survived by her husband Richard Sobjack, son Shawn Tolliver, step-son Jeff Sobjack, step-daughter Sindy Wiebe, brothers Michael and Patrick Simonds, sister Mary Hay, dear friend Kerry Messer, grandchildren Cassie Wiebe, Mandy Vevag and Richard Wiebe, 3 great-grandchildren Morgan Vevag, Colton Wiebe and Nolan Wiebe with one more great-granddaughter, Murphie Wiebe due in April as well as many other loving relatives and friends. A Celebration of Debby’s Life will be held on Sunday, February 23, 2020 at 1:00pm at Westford’s Broadway Hall. Memorials may be made to Whatcom Hospice House, 2800 Douglas Ave., Bellingham, WA, 98225 or Peace Health Cancer Center, 3301 Squalicum Pkwy, Bellingham, WA, 98225. You may share your memories of Debby with her family at www.westfordfuneralhome.com.

Debby Sobjack passed away on February 12, 2020 in Bellingham. Debby was born on August 25, 1951 in Bellingham to Paul and Francis (Payne) Simonds. She had a long and rewarding career with the Bellingham School District where she was admired... View Obituary & Service Information

The family of Deborah Ann "Debby" Sobjack created this Life Tributes page to make it easy to share your memories.