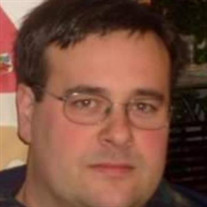 David Taylor passed away December 21, 2021. He grew up in Ferndale WA, graduated from FHS in 1986. He was a born-again Christian, a man of deep faith, and a true outdoorsman. He was a beloved son, brother, uncle, nephew, cousin and friend and a true gentleman. He spent most of his time growing up in Whatcom County hunting and fishing. He started commercial fishing as a teenager in Puget Sound and SE Alaska and commercial crabbing on the West Coast. He had various occupations as a Merchant Mariner working for Foss Tug, NOAA, Alaska Ferry System, and finally for Washington State Ferries. David had finally gotten the Ferry run he wanted working out of Anacortes, WA. David believed in being a good steward of the land, creeks and rivers. He spent time monitoring creeks and rivers and salmon of Whatcom County and voluntarily cleaning up streams and trails. We have been so blessed to have him in our lives. Along the way, he had made many great friends who encouraged and mentored him with work and Loving God. We know he was appreciative and loyal to his friends. Dave perfected canning and smoking fish and venison. Just recently he was so pleased at the “the best smoked venison I ever made!” David is survived by his mother and stepfather Patricia and Tom Samuelson, sister Alice Taylor and a special Aunt, Carol Taylor, as well as Uncle Mike, Uncle Joe, and Aunt Joanne. also, nieces Clarice Taylor, Natalie Trull, and great-nephews Rowan and Arlo who loved “Uncle David!” Everyone looked forward to his smoked fish and BBQ’d salmon which he shared with his family and friends. He was preceded in death by his father Warren Taylor, Aunt Joan Downing, Aunt June Barton, Grandparents Harry and Beatrice Ederer. David loved the Earth and in honor of his memory all are invited to volunteer for a community work party of their choice through the Whatcom County Parks Volunteer Program. The family would like to thank the first responders for all their efforts the morning of December 21st. A celebration of life will be scheduled at a later date in late winter/early spring. A notification will follow. You may share memories with the family at www.westfordfuneralhome.com.

David Taylor passed away December 21, 2021. He grew up in Ferndale WA, graduated from FHS in 1986. He was a born-again Christian, a man of deep faith, and a true outdoorsman. He was a beloved son, brother, uncle, nephew, cousin and friend and... View Obituary & Service Information

The family of David Taylor created this Life Tributes page to make it easy to share your memories.