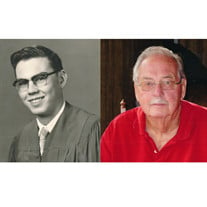 David Siden, age 81, took his final flight on December 1, 2017. He was born April 29, 1936 in Bellingham to Ed and Elnora Siden. Upon graduation he joined the US Army and was stationed in Germany. He married Bonita Smoot shortly after returning from the service and they enjoyed 41 years together. He was a union plumber at Blythe Plumbing. He became a partner in Blythe and then retired. An avid pilot, they flew all over the United States, Canada and Mexico in his beloved Cessna 180, N2482C. He enjoyed hunting with his son, grandsons, family and friends at the Lost River family cabin. He spent time at Waldron Island with family from an early age, first boating and then flying in with his Cessna. Able to retire at 55 years of age, he pursued his passions of flying and hunting. After the passing of his beloved Bonnie he found the second love of his life, JoAn Sternhagen-Swope, while attending the Church of the Assumption. Dave and JoAn were married in 2002. They enjoyed pursuing his hobbies and spending time in Hawaii together. Dave was preceded in death by his parents, wife Bonnie and son Patrick. He is survived by his wife JoAn, son Michael (wife Joyce) Siden, daughter Colleen (Hans) von der Hofen, grandchildren Brent, Hailey, Kourtney and Michael, great-grandson Ryder, sisters Julie Cummins and Kathy (husband Chuck) Lawrence, brother Richard (wife Carol) Siden, JoAn’s children Tracie Swope Annestad (husband Randy), Tamera Swope LaBelle (husband David), Tony Swope (wife Rayna), JoAn’s 7 grandchildren and 4 great-grandchildren, and many loving relatives and friends. Memorials in Dave’s name may be made to Whatcom Hospice House or Hope House at Church of the Assumption. A time for sharing and Vigil prayer service will be held at Westford Funeral Home on Sunday, December 10th at 7 PM. Mass of Christian Burial will be held at Church of the Assumption on Monday, December 11th at 10:30 AM. Reception following at the Church. Committal following at Greenacres Cemetery. You may share memories with the family at www.westfordfuneralhome.com.

David Siden, age 81, took his final flight on December 1, 2017. He was born April 29, 1936 in Bellingham to Ed and Elnora Siden. Upon graduation he joined the US Army and was stationed in Germany. He married Bonita Smoot shortly after returning... View Obituary & Service Information

The family of David J. Siden created this Life Tributes page to make it easy to share your memories.