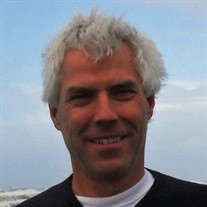 Dave Hansen, age 62 passed away Thursday, November 12, 2015 in Bellingham, WA. He was born February 9, 1953 in Ironwood, MI to Martin and Laila Hansen. Dave migrated from Northern Michigan to Alaska in 1974, landing a job as a sport-fishing guide. He moved on to owning his own guide business and flew as a bush pilot throughout Alaska. He fished commercially in Bristol Bay since 1979. He also commercially fished halibut and herring. With his family, Dave moved to Bellingham in 1986 and within a few years he partnered up on a reefnet gear. In 1992 he co-founded Lummi Island Wild. Dave loved grilling salmon and hosting friends and family. He was passionate, full of life and brought a creative and entrepreneurial spirit to everything he touched. Dave worked well with his hands and liked to solve problems on his boats and around the home. He was a devoted and loving father who did everything to support his children. He was also a supportive companion and a beloved friend to many. Dave was preceded in death by his father Martin and his brother Mike. He is survived by his companion Thao Nguyen, son Cole (Cristina) Hansen of Berkeley, CA, daughter Sarah (Devin) Farlow of Bellingham, WA, mother Laila (George) Whitfield of Gladstone, MI, siblings Andy and Bob Hansen, Stacy Whitfield, Lance (Cindy) Whitfield, Stephanie (Andrew) Buchinger and Kevin (Jessica) Whitfield, sister-in-law Bernadette Hansen, former wife Daisy Conway Hansen, and many loving relatives and friends. A celebration of Dave’s life will be held at Westford’s Broadway Hall, 1300 Broadway in Bellingham on Thursday, November 19th at 1 PM. Reception following.

Dave Hansen, age 62 passed away Thursday, November 12, 2015 in Bellingham, WA. He was born February 9, 1953 in Ironwood, MI to Martin and Laila Hansen. Dave migrated from Northern Michigan to Alaska in 1974, landing a job as a sport-fishing... View Obituary & Service Information

The family of David Martin Hansen created this Life Tributes page to make it easy to share your memories.