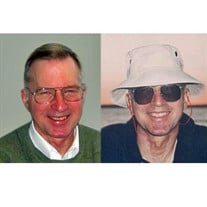 David Michael Cahill went home to be with the Lord on June 12, 2016 in Bellingham, WA in the gentle loving embrace of his wife, Donna-Marie. David was born April 18, 1944 in Payette, Idaho. He grew up on the family farms and ranches in the Crystal area (half way between the towns of Payette and Weiser) and the Weiser Flat area near Weiser, Idaho. David attended elementary school at the Haas School, a two-room school house on the Weiser Flat. He attended junior high and high school at Payette. He was active in FFA, band, the Honor Society, and was the Student Body President in 1962. David attended the University of Idaho and was a member of Delta Sigma Phi Fraternity. He graduated from the University of Washington with a BA in Business Administration. David was a Viet Nam era veteran (enlisted) in the U.S. Navy (1966-1970) as a Petty Officer (E-5) and attended boot camp at Great Lakes Naval Training Center. He was stationed at the Naval Air Station in Whidbey Island, Washington and aboard the USS Proteus (AS-19), homeport Guam. After college, David worked in mortgage banking in Boise and Reno until returning to the family farm in the Crystal area. On July 18, 1981 David married Donna-Marie Muntjewerff. They would have celebrated their thirty-fifth wedding anniversary on the eighteenth of July. In 1984 David and Donna-Marie moved to Bellingham, Washington where David worked for the City of Bellingham from 1985 through May 2010. He was the Block Grant Programs Manager for the Planning and Community Development Department. He oversaw two of the City’s largest federal grants, the Community Development Block Grant and the HOME Investment Partnership. The grants totaled approximately $2 million in 2010. During David’s time with the City, he managed Affordable Housing Projects totaling over $32 million, Home Rehabilitation Projects totaling over $5 million in loan disbursements, and oversaw Neighborhood Initiative Projects for neighborhood parks and trails. He worked with a wide variety of community partners, from neighborhood associations to nonprofit housing developers and service organizations to determine the greatest needs for the City’s funding and to implement projects. He was staff liaison to two citizen boards, the Community Development Advisory Board and the Housing Development Fund Loan Review Board. David left a wonderful legacy all around Bellingham by helping provide safe and affordable housing, and new or improved parks and trails for low- and moderate-income individuals and families. He was a diligent and hard worker and known around the City of Bellingham as a kind man. David was a member of the Antique Automobile Restorers Club of Bellingham (past Vice-President and showed a 1975 Cadillac Coupe de Ville); Bellingham Sail and Power Squadron (past NOAA Coop Charting Chairperson); Corinthian Yacht Club of Bellingham (one of the few men that started the Yacht Club in 1985 and past Commodore). David especially loved his wife, children and grandchildren. David enjoyed working in the yard and grew beautiful roses. David enjoyed working in his yard and visiting with the neighborhood children and their parents. He loved classical, Irish/Celtic music and music of the 50’s, 60’s and 70’s. His favorite bird was the Chickadee and his favorite cars were a 1929 Model A Ford and the 1961 Austin Healey 3000. He loved showing his 1975 red with white trim Cadillac Coupe de Ville that won numerous awards. Some of David’s happiest times in life were being with his wife Donna-Marie and sailing in the San Juan and Canadian Gulf Islands aboard their sailboat Moxie (SunYacht 27) and (His) Amazing Grace (Ericson 38), or farming and ranching on the Cahill Ranch at Crystal, Idaho. David and Donna-Marie attended Grace Baptist Church in Bellingham, Washington where they received much love and support during his battle with cancer. David was preceded in death by his father, James Robert Cahill, Jr. and grandparents, aunts and uncles. He is survived by his wife Donna-Marie Cahill of Bellingham, WA; his mother Dorothy Cahill of Weiser, ID; children Kathleen Cahill of Garden City, ID; Gary Muntjewerff of Summerville, OR and LaDawn Marsters of Boise, ID; two grandchildren, Samantha and Emma Schabot of Garden City, ID; his siblings Barry (Susan) Cahill of Mountain Home, ID and Julie (Bruce) Kerner of Weiser, ID; and many nieces, nephews and cousins. A memorial service will be held on Friday, June 17, 2016 at 1:00 p.m. at Grace Baptist Church, 3920 James Street Road, Bellingham, WA. In lieu of flowers, memorial donations may be made in David’s name to St. Joseph Cancer Center, 3217 Squalicum Parkway, Bellingham, WA 98225 or Whatcom Hospice, 2800 Douglas Avenue, Bellingham, WA 98225.

David Michael Cahill went home to be with the Lord on June 12, 2016 in Bellingham, WA in the gentle loving embrace of his wife, Donna-Marie. David was born April 18, 1944 in Payette, Idaho. He grew up on the family farms and ranches in the Crystal... View Obituary & Service Information

The family of David Michael Cahill created this Life Tributes page to make it easy to share your memories.

David Michael Cahill went home to be with the Lord on June 12,...