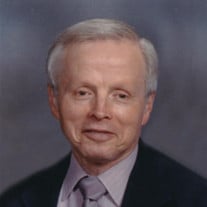 Daniel Lee Wilkerson was born August 1, 1938 and passed away peacefully early Wednesday, January 13, 2016 at Hospice House. Daniel was born in Wichita, KS to Margaret & Bill Wilkerson, the youngest of three including his sister Joan and brother Tom. Daniel graduated from Kansas State University and served in the Coast Guard Reserve as a medic. Daniel traveled and worked his way across the US, meeting and marrying his beloved wife Kay in Evergreen, CO on September 16, 1967. Daniel worked in city and environmental planning and resource management his entire professional career, retiring from the State of Alaska Dept. of Environmental Conservation. His son Jonathan was born in AK, and upon taking early retirement, the family moved to Bellingham, WA. We will remember Daniel for his many years of service and for the volunteer work he gave to the community. Daniel was active in the Bellingham Bay Rotary Club and served as president for the East Anchorage Club in AK. He worked with the Interact Club at Squalicum High School and was a trustee with the Boy Scouts troop at his church, Garden Street United Methodist. Faith was important to Daniel and he was a past trustee and served on numerous committees at Garden St. United Methodist. Daniel was a loving husband, and a wonderful father with a big heart, and a steward of the environment. He was very social and active in the community, and will be sorely missed by many. Daniel is survived by his wife of 48 years, Kay, son Jonathan and daughter-in-law Margie, sister Joan and brother-in-law Dent, nieces Louisa and Theresa, and nephew Steve. He was preceded in death by his parents Margaret and Bill, and his brother Tom. Memorials made to Garden St. United Methodist Church or Hospice House. Please join us in celebrating Daniel’s life at 1:00 PM on Monday, January 18th, at Garden St. United Methodist Church. Reception will follow.

Daniel Lee Wilkerson was born August 1, 1938 and passed away peacefully early Wednesday, January 13, 2016 at Hospice House. Daniel was born in Wichita, KS to Margaret & Bill Wilkerson, the youngest of three including his sister Joan and brother... View Obituary & Service Information

The family of Daniel Lee Wilkerson created this Life Tributes page to make it easy to share your memories.