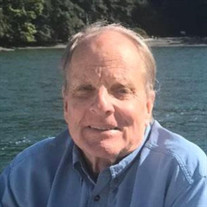 Dr. Daniel Brown died on April 23, 2022 in Twin Falls, Idaho at St. Luke's Magic Valley Hospital. Dan was born in Berkeley, California in 1941. Following his father's example, Dan earned the rank of Eagle Scout. He studied engineering at the University of Michigan and was named to the Vulcan honorary society. He worked for a year as an engineer before completing Naval Officers Candidate School. He served for three tours in Vietnam including a posting with the riverine units. He returned to California and took pre-med courses at San Diego State University. He was accepted to the University of California Irvine where he completed his medical degree. He did a series of internships and residencies before becoming board certified in cardiology. He joined the Consultants in Medicine which later became The Madrona Medical Group in Bellingham, Washington in 1978 and practiced there for 25 years. In 2003 he moved his practice to Twin Falls, Idaho where he introduced interventional cardiology to the community. He was noted for being rigorously dedicated to his patients and he thoroughly educated them about their diagnoses. He had a propensity for straight talk with patients and colleagues. He worked in Twin Falls, Idaho from 2003 until he retired in 2015. Upon his return from Vietnam, he met and married Noanie DeBakcsy and they worked together through medical school while raising two children, sons Christopher and Alex. Both sons joined their father and grandfather as Eagle Scouts. Dan was an active member of St. Paul’s Episcopal Church and the Rotary Club of Bellingham. He had many interests including sailing to the San Juan Islands and up to Desolation Sound in Canada. He enjoyed taking friends and family on his boat, the Bravo Zulu, out for cruises and plying them with nautical lore. He was also an active marksman. He was a great patriot and devotedly studied the history of our country, especially military history. He read broadly from a diverse group of sources covering areas of political activity and religious theory. He had deeply held political beliefs which he always discussed and argued passionately, but never with rancor. He is survived by his wife, Noanie, of 53 years, his son Christopher (wife Molly), their children Jack and Emerson, and his son Alex (wife Randy) and their sons Remington and Winston. His family called him “Captain Dan”. A memorial service will be held at the Bellingham Yacht Club, 2625 S. Harbor Loop Dr., at 1 PM on Saturday, May 21. Reception immediately following. You may share memories with the family at www.westfordfuneralhome.com.

The family of Dr. Daniel Brown MD created this Life Tributes page to make it easy to share your memories.