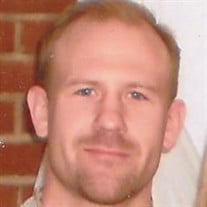 Cody Shaun Hodges was born on June 2, 1979 in Bend, OR to John and Christine (McCulloch) Hodges. He died on May 29, 2017 in an automobile accident in Lynden, WA at the age of 37. Cody grew up with his half-sister Becky in the small town of Burns, OR as a carefree child who loved to explore, hunt and go on countless outdoor adventures. Cody was athletic and fiercely competitive, participating in many sports. He particularly excelled in wresting, earning many state titles, and attended Boise State University on a wrestling scholarship. He was also a die-hard fan of Dirk Nowitzki and the Dallas Mavericks, along with the Oregon Ducks. Cody was well-read, highly educated, and an intellect at heart. He earned his BA in History and a Masters in Political Science (Public Policy and Administration) from Boise State University. He had goals and aspirations of pursuing additional degrees and courses of study. Along with his desire to learn, he was gifted with his hands and a mechanical mind. He learned the trade of heavy equipment repair from his dad and used it throughout his life. Cody could fix anything and wouldn’t stop until he figured it out. Cody married the love of his life, Kimberly Kolar, on July 31, 1999. Together they have three children, Aanikka (15), Kyas (12), and Athena (10). He loved his children and family with all of his being and was a very proud and doting father. He was also a dog-lover and had many loyal companions by his side. Cody had a generous and giving heart and was always there to help when he could. He had a way of connecting with people and never knew a stranger. He was even honored as a Red Cross hero for selflessly pulling a man from a burning vehicle in 2013. Cody was faced with challenges and struggles in this life, particularly with alcoholism. Out of these difficulties Cody wanted to use his life to help others. He wanted good to come of his pain by bringing awareness to addiction and emotional challenges. Despite these adversities, Cody was highly resilient and rose above potentially life threatening circumstances numerous times. Most importantly, Cody drew close to his Lord Jesus Christ and had a spiritual awakening when he was at his lowest point. It was then that he truly experienced his time of greatest peace. The day he passed away his inspirational calendar providentially read, “O Lord, put a new song in my mouth, a hymn of praise to you. Let my struggles be a witness to all that you are God and there is no other. Let those who peer into the midst of this chaos see that you are a faithful and mighty God. That you are full of love and compassion.” Cody is survived by his wife Kimberly (Kolar) Hodges and their children Aanikka, Kyas, and Athena Hodges; his parents John and Christine Hodges; his half-siblings, Chandra Dickinson, Glen “Butch” Hodges, and Becky Pearson; Grandma Bunny (Bernice Pope); as well as many aunts, uncles, cousins, nieces, nephews, and friends. He was preceded in death by his grandparents Jim Pope, Richard McCulloch, and Lois and John Oscar Hodges. A Celebration of Life service will be held on June 10, 2017 at Birchwood Presbyterian Church at 11:00AM. In lieu of flowers, donations to our children's college fund can be made at Whatcom Educational Credit Union under the Cody Hodges Memorial Fund. You may share memories with the family at www.westfordfuneralhome.com.

Cody Shaun Hodges was born on June 2, 1979 in Bend, OR to John and Christine (McCulloch) Hodges. He died on May 29, 2017 in an automobile accident in Lynden, WA at the age of 37. Cody grew up with his half-sister Becky in the small town... View Obituary & Service Information

The family of Cody Shaun Hodges created this Life Tributes page to make it easy to share your memories.